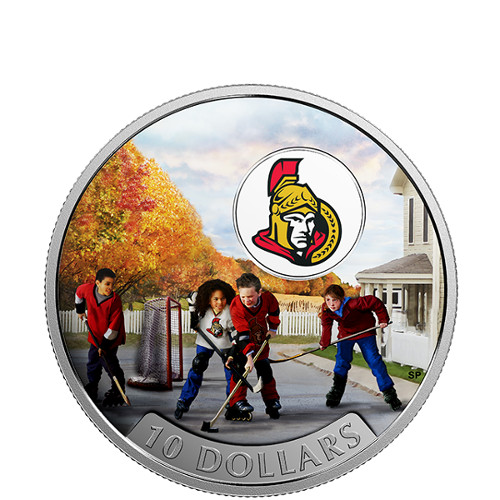 There’s no sport in Canada more beloved and popular than hockey. Played by millions of children each year, the sport draws millions more viewers during the NHL season when the nation’s seven NHL franchises compete for the Stanley Cup. Right now, the 2017 ½ oz Proof Silver Canadian Passion to Play Ottawa Senators Coin is available to purchase on Silver.com.

Passion to Play is a seven coin series from the Royal Canadian Mint that highlights the seven NHL franchises that play in cities across Canada. The Ottawa Senators have the pleasure of playing in the federal capital city of Canada, but are one of the youngest NHL franchises in the country as well.

The modern-day Senators are actually the second franchise in the NHL in the city to use the name Senators. The original franchise was founded in 1883 and won 11 Stanley Cups, participating in the NHL from 1917 until 1934. The modern Senators started play in the 1992-1993 season of the NHL.

On the reverse of the 2017 ½ oz Proof Silver Canadian Passion to Play Ottawa Senators coin is a colorized scene of young children playing a game of street hockey in their neighborhood. The fall colors are in full bloom in the background and the Senators logo is featured above the design field.

The obverse of all Proof Silver Canadian Passion to Play Coins features a portrait of Queen Elizabeth II. Her Majesty’s image was created for Canadian coins in 2003 by Susanna Blunt and is the most up-to-date profile of the monarch in use on the nation’s currency.

Each 2017 ½ oz Proof Silver Canadian Passion to Play Ottawa Senators coin ships in a maroon clamshell with a graphic beauty box featuring the design from the reverse. The use of NHL and the NHL Shield on these coins is a trademark of the National Hockey League, and the use of NHL and NHL team marks is property of the NHL and its franchises.

If you have any questions, please don’t hesitate to ask. You can reach Silver.com associates at 888-989-7223, connect with us online through our live chat, or send us an email with your questions.