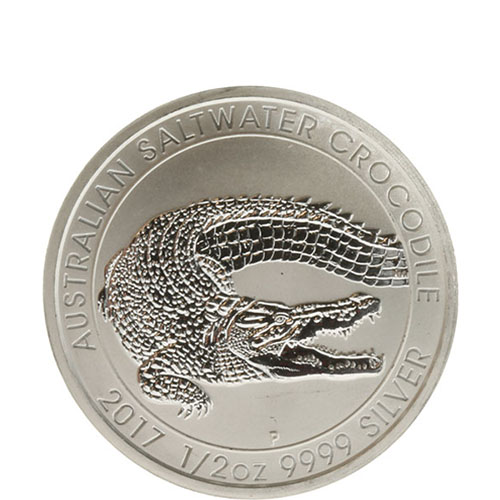 Tipping the scales at more than 2,000 lbs, in some cases, the saltwater crocodile is one of the world’s deadliest predators and is the largest living reptile in the world. Despite its size and weight, it can launch lightning-fast attacks on its prey over short distances. Now, the 2017 1/2 oz Silver Australian Saltwater Crocodile is available to you for purchase online at Silver.com.

Saltwater crocodiles are so-named because of the regions the creatures naturally inhabit. This species of crocodile is found in the coastal waterways along the coast of India, through Southeast Asia, and as far south as Australia. The typical habitat includes both saltwater directly along the coasts and brackish waters in marshes and tidal pools inland.

All of the 2017 1/2 oz Silver Australian Saltwater Crocodiles in this listing are available to you in new condition and will ship individually with a protective plastic flip. These are among the first date-marked coins from the Perth Mint that feature .9999 fine silver content in a bullion specimen following the 2016 release of the Silver Australian Kangaroo.

The obverse face of each 2017 1/2 oz Silver Australian Saltwater Crocodile features an effigy of Her Majesty, Queen Elizabeth II. The Queen is depicted in right-profile relief in this design that was created in 1998 for the Royal Mint of England. The Perth Mint features this design on all of its coins dated 1999 to 2018. In this image, the Queen wears the Girls of Great Britain and Ireland Tiara.

On the reverse side of the 2017 Silver Australian Saltwater Crocodile is a depiction of the creature the release is named after. Here, a massive crocodile is shown with its body curled in a C-shape and its mouth open wide. Saltwater crocodiles are ambush predators. The crocodile uses the cover of water to get close to its prey before launching itself from the water to capture the target prey in its powerful jaws. Though it has the bite force to break bones, the crocodile actually kills its prey dragging it underwater and rolling until the creature drowns.

Silver.com customer service is available to help answer any questions you have about silver for sale on the phone at 888-989-7223. You can also chat with us live online or email us directly.