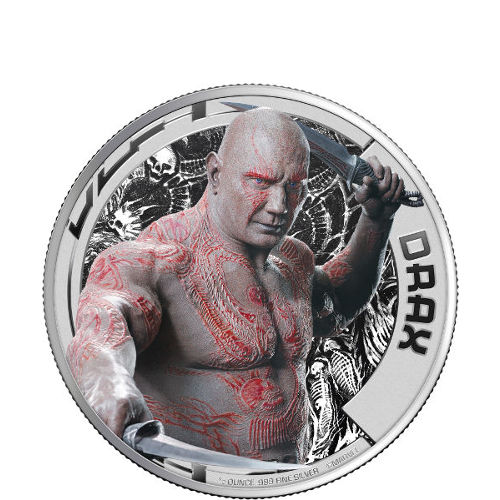 The 2017 ½ oz Silver Cook Islands Guardians of the Galaxy Drax Coin is available to you today with a colorized reverse finish and a beautiful ultra-high-relief coining. Ultra-high-relief proofs have frosted devices, mirrored finishes, and brilliant 3D visuals that stem from the high-pressure coining in which the blanks are struck multiple times.

On the reverse of the Guardians of the Galaxy Drax Coin you’ll find a colorized depiction of Drax. Bautista played the role of Drax in both Vol. 1 and Vol. 2 of the film series, and his figure is the only colorized element on the reverse, which also includes an engraving of his character name in the film.

The obverse of all 2017 ½ oz Silver Cook Islands Guardians of the Galaxy Drax Coins bears the effigy of Queen Elizabeth II. The longest-reigning monarch in the world today, and Britain’s longest reigning, Her Majesty is captured in right-profile relief in this fourth-generation image created in 1998 by Ian Rank-Broadley.

Each one of these brilliant silver coins ships to you inside of an individual capsule for protection, and is presented within the collectible tin that bears imagery from the feature film depicting Drax the Destroyer.

Please don’t hesitate to contact Silver.com with your questions. Feel free to call us at 888-989-7223, chat with us live online, or send us an email with your inquiries. When you need to know the silver prices for today, just visit our homepage for an update!