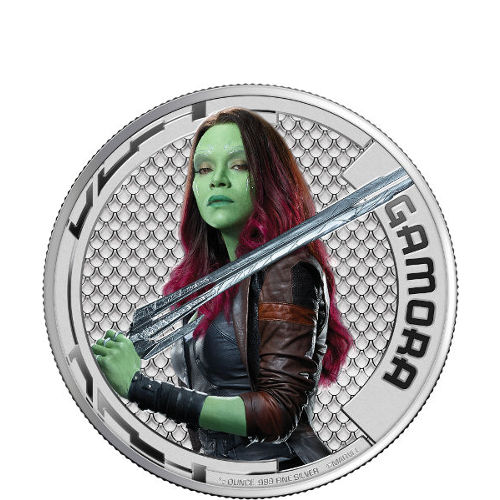 Gamora is one of the fictional characters from the Guardians of the Galaxy universe. Created by Jim Starlin, she first appeared in the comic Strange Tales in episode #180 which debuted in 1975. In the modern feature films, Gamora is played by American actress Zoe Saldana, who lends her figure and voice to the character. Right now, the 2017 ½ oz Silver Cook Islands Guardians of the Galaxy Gamora Coin is available to you for purchase online at Silver.com.

Gamora is played by Saldana in the films, but her character first appeared more than 40 years ago as the adopted daughter of Thanos. She is the last of her species and has superhuman strength, agility, and an accelerated ability to heal herself.

On the reverse of the 2017 ½ oz Silver Cook Islands Guardians of the Galaxy Coin you’ll find the image of Gamora. Among her abilities, Gamora is a highly skilled combatant with the a bility to overcome most of the opponents she would face in her universe.

The obverse of all coins in the Guardians of the Galaxy Series features the effigy of Queen Elizabeth II. Her Majesty is depicted in right-profile relief in this design which comes from Ian Rank-Broadley and was created in 1998.

You can purchase the 2017 ½ oz Silver Cook Islands Guardians of the Galaxy Gamora coin today. Each coin is available for individual purchase to commemorate your favorite character or you can purchase all five coins together in an impressive set.

If you have questions, please contact Silver.com. Our associates are available at 888-989-7223, online using our live chat, and via our email address.