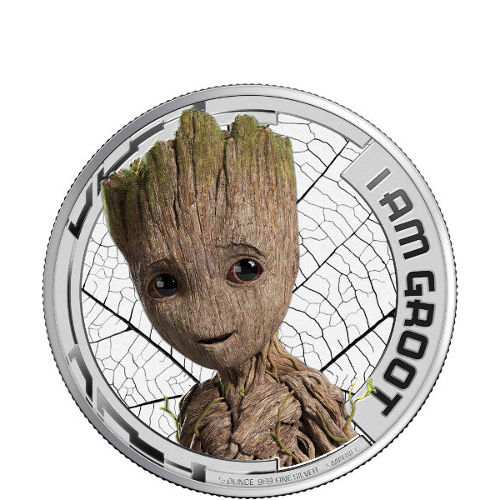 For fans of the Guardians of the Galaxy comics and film franchise, the loss of Groot was a terrible event at the conclusion of Vol. 1. Those tears were dried quickly though when moviegoers realized in Vol. 2 that Rocket had brought a piece of his friend back to life with Baby Groot using a small twig from the original Groot. Commemorate Groot with the 2017 ½ oz Silver Cook Islands Guardians of the Galaxy Groot Coin, available to you online at Silver.com.

Any given silver coin in the Guardians of the Galaxy Silver Series all have colorized finishes on the reverse field of the coin. Only the image of the character represented on the coin is captured in color, and this is done so to accurately represent the character as seen in the feature film itself.

On the reverse of the 2017 ½ oz Silver Cook Islands Guardians of the Galaxy Groot Coin you’ll find the lovable image of Baby Groot. When Groot used his body to shield his comrades at the end of the first film, he was seemingly destroyed. Rocket was able to recover a small twig and grow Baby Groot. His image is featured on the reverse, along with an engraving of his name.

The obverse of all Cook Islands Silver Coins feature Queen Elizabeth II’s right-profile portrait. Her Majesty’s effigy appears on all commonwealth coinage, and in this instance, the depiction is a fourth-generation image created by Ian Rank-Broadley in 1998.

Each of the Silver Cook Islands Guardians of the Galaxy Coins are struck in ultra-high-relief proof. In addition to frosted devices and mirrored background fields, you’ll find intense 3D visuals on these coins which have been struck multiple times under intense pressure during coining.

We encourage all Silver.com customers to call us with questions at 888-989-7223. We’re also available online using our live chat and email features.