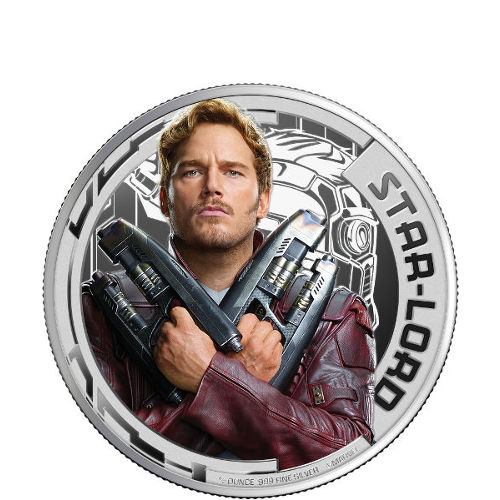 With the release of Guardians of the Galaxy Vol. 2, Marvel Studios had yet another massive hit on its hands at the box office. Increasingly, Marvel Comic feature films have given rise to precious metal coins bearing the colorized designs of popular characters and films. Right now, 2017 ½ oz Silver Cook Islands Guardians of the Galaxy Star Lord Coins are available for you to purchase online at Silver.com.

Each of the silver coins in the Guardians of the Galaxy Collection is struck using ultra-high-relief coining processes. With this approach, silver blanks are often struck under intense pressure multiple times to create a coin design field with impressive depth and thickness in the finished product.

All of the 2017 ½ oz Silver Cook Islands Guardians of the Galaxy Star Lord Coins, along with other releases in this new series, feature colorized finishes on the reverse design field. The use of colorization is confined to the character featured on the coin’s reverse field, bringing their effigy to life as fans would see it on the big screen.

On the obverse of all 2017 ½ oz Silver Cook Islands Guardians of the Galaxy Coins you’ll find the effigy of Queen Elizabeth II. Her Majesty has appeared on all commonwealth coinage since her ascension to the British throne in 1952. This design is the 1998 fourth-generation depiction of the Queen from Ian Rank-Broadley.

All coins in the Guardians of the Galaxy Silver Coin collection ship individually inside of a collectible tin, with the coin itself encapsulated in plastic. If you’re interested, there is also a five-coin collection available with all coins, which are also available for individual purchase.

If you have questions, we’re here to help. Silver.com customer service is available at 888-989-7223, online using our live chat, or via our email address.