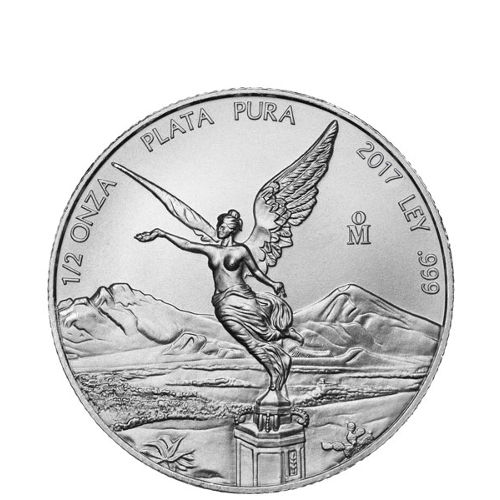 The Silver Libertad is Mexico’s official silver bullion coin series, and it is one of the few in the world to feature fractional-weight options in this precious metal. While its competitors in North America, the Silver Maple Leaf and Silver Eagle, have no fractional offerings, the Silver Libertad offers four! Today, the 2017 1/2 oz Silver Mexican Libertad Coin is available to purchase online at Silver.com.

Winged Victory is an image that is steeped in Mexico’s battle for independence from Spanish colonial rule in the 19th century. Her figure is an angelic one that holds a wreath aloft in one hand as a symbol of free governance, while the other holds broken chains symbolizing the fact that Mexico is no longer enslaved by the whims of an overseas power.

Today, there is a statue of Winged Victory that stands in the center of Mexico City. It was erected there in 1920 as part of the nation’s centennial celebration of its war of independence, and featured one year later on the obverse of the gold Centenario coin.

Each of the 2017 1/2 oz Silver Mexican Libertad Coins in this product listing are available in BU condition. Coins in this condition feature no signs of wear and tear, though you may notice minor flaws such as breaks in the luster, spotted surfaces, or contact marks from the production process at the mint.

The obverse of all Silver Libertads includes the image of Winged Victory. This modern depiction on the Silver Libertad shows Winged Victory as she stands at the top of the statue pillar in Mexico City’s central square. Engravings include a year of issue, weight, purity, metal content, and the Mexican Mint’s mint mark.

The Mexican Mint is the sovereign mint of Mexico. Located in Mexico City, it was founded in 1535 by Spanish conquistadors and is now operated by the federal government of Mexico and its central bank, Banco de Mexico.

Please don’t hesitate to contact Silver.com at 888-989-7223 if you have questions. You can also reach out to us online through our live chat and email address.