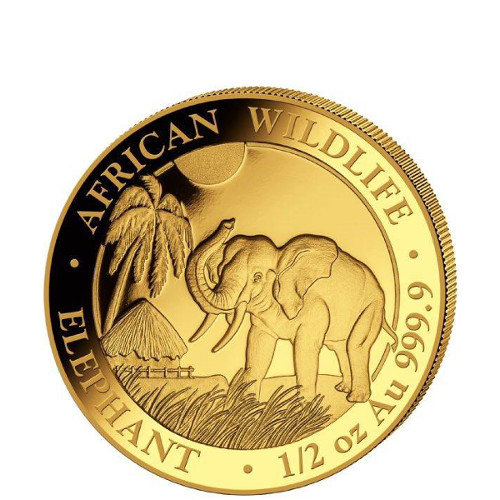 The 2017 release of the Somalian Elephant coins could go down as the most significant in the coin’s history. After a small expansion of the program in 2016, the Bavarian State Mint went all out for 2017 with the release of six new weights in silver and two in gold. Today, the 2017 ½ oz Gold Somalian Elephant Coin is available on Silver.com in BU condition.

For 2017, the Silver Somalian Elephant is available with six new weights, including its first-ever fractional-weight coins. The new weights include a 1/10 oz, ¼ oz, and ½ oz option in silver, as well as 2 oz, 5 oz, and 10 oz, weights joining the 1 oz and 1 Kilogram stalwarts.

On the obverse of the 2017 ½ oz Gold Somalian Elephant Coin is the image of the African elephant. All-new for 2017, this image depicts an elephant standing in the grass in front of a small, traditional hut. Engravings include “African Wildlife,” “Elephant,” and “1/2 oz Au 9999.”

The reverse of all 2017 Gold Somalian Elephant Coins features the traditional coat of arms for Somalia. This image depicts a pair of leopards holding up the heraldic shield, which includes a single star in the center with a backdrop of horizontal lines. Engravings on this side read “Somali Republic,” “2017,” and “500 Shillings.”

Gold Somalian Elephant coins are sought after in anticipation for gold’s continued historic value, which you can monitor minute by minute via our active charts that show current gold prices.

The Bavarian State Mint is located in Munich, Germany, and was opened in 1158. One of Germany’s oldest operating mints, it is also one of the most important. In addition to the commemorative Somalian Elephants, it produces official Euro currency for Germany.

Please feel free to contact Silver.com with questions. You can reach us at 888-989-7223, connect with us online using our live chat, or send us an email.