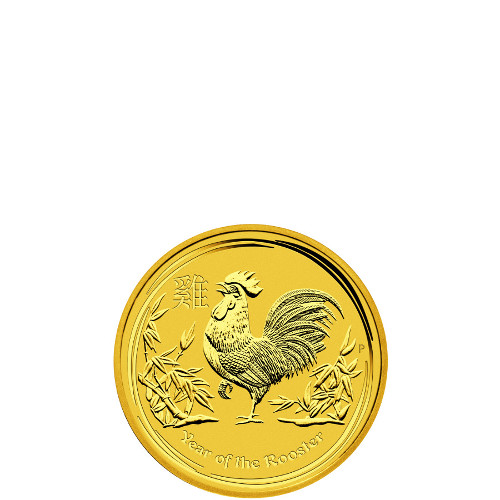 The Lunar Series II coin program isn’t coveted just for its new designs each year, but also the variety of products offered through the series. One of the Perth Mint’s signature series, Lunar Series II gold coins are available in a total of eight different weights, with the 2017 1/20 oz Gold Australian Rooster Coin representing the smallest option. This coin is available today from Silver.com in BU condition.

Each new coin release in the Lunar Series II coin program from the Perth Mint bears a new reverse design. Introduced in 2008, these coins represent one of the 12 animals in the Chinese Lunar Calendar. While the Perth Mint has already released a 12-coin Lunar Series (1996-2007), this second series features all-new designs with greater detail.

Additionally, the Perth Mint now releases Lunar Series II coins with different designs available on the silver and gold coins. Any given release year features the same animal, but the design is slightly varied between gold and silver coins.

All 2017 1/20 oz Gold Australian Rooster Coins in this listing are BU specimens. Coins with a Brilliant Uncirculated grade feature no signs of wear and tear on the surfaces, however you may notice flaws such as breaks in the luster, spotted surfaces, or contact marks from striking the coins during production.

The reverse of the 2017 1/20 oz Gold Australian Rooster coin features a rooster standing in front of a background of bamboo shoots and leaves. Engravings include the Perth Mint’s “P” mint mark, the Chinese symbol for rooster, and the phrase “Year of the Rooster” along the bottom.

On the obverse of all Gold Australian Roosters is the right-profile portrait of Queen Elizabeth II. Created by Ian Rank-Broadley in 1998, it represents the fourth-generation effigy of Her Majesty to appear on commonwealth coins since 1952.

Perth Mint is a state-owned entity of Western Australia with a rich history. Originally part of the Royal Mint system, the Perth Mint operates outside the Royal Australian Mint system in Canberra, and enjoys legal tender status for its coins under the Currency Act of 1965.

We encourage all Silver.com shoppers to connect with us to get answers to your toughest questions. You can call us at 888-989-7223, connect with us online through our live chat, or send us an email.