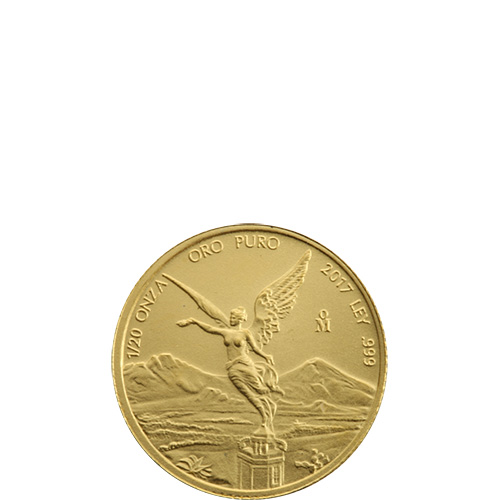 The Gold Libertad coin from the Mexican Mint is part of the official bullion coin series of Mexico. These coins are available in gold and silver on a regular basis, with bullion and proof versions to entice investors and collectors alike. Available in numerous weights, the 1/20 oz Gold Libertad is the smallest option. Today, 2017 1/20 oz Gold Mexican Libertad Coins are yours to purchase online at Silver.com.

Libertad coins were introduced first in gold by the Mexican Mint in 1981, but have been more prominently and regularly offered in silver. Nonetheless, the Gold Libertad represents the direct descendant of the nation’s first major gold coin series, the Centenario. Struck to celebrate 100 years of independence, the Centenario’s designs were revived for this coin series.

Each 2017 1/20 oz Gold Mexican Libertad Coin in this listing is in BU condition. Coins in BU condition have no signs of wear and tear, though you are likely to notice flaws ranging from breaks in the luster and spotted surfaces to contact marks from the production process at the mint.

On the obverse is the image of Winged Victory. Based upon the Greek Goddess of Victory, Winged Victory holds a wreath over her head in her right hand, but rather than a laurel in her left hand you’ll find the broken chains of servitude in the Mexican depiction. She looks over the people of Mexico City as a 22-foot tall statue atop the Mexican Independence Victory Column, which was erected in 1921.

The reverse of all 2017 1/20 oz Gold Mexican Libertad coins features the modern coat of arms for Mexico. A design that depicts the Mexican bald eagle in battle with a serpent on the branch of a cactus, you’ll find only the modern design on the 1/20 oz coins because of their smaller surface area.

Please feel free to contact Silver.com with questions about these gold coins. You can reach us at 888-989-7223, chat with us live online, or simply send us an email with your inquiries.