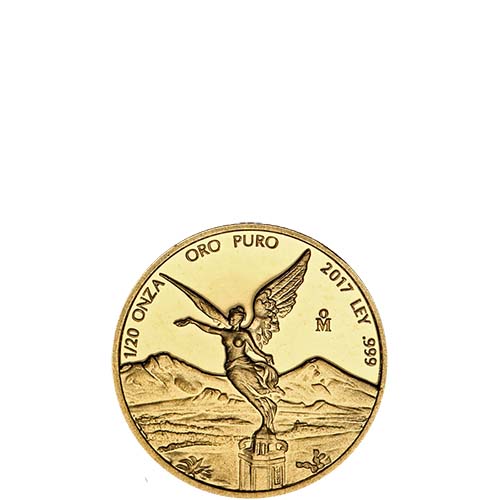 For collectors buying gold, the Mexican Mint is the source of one of the lowest mintage coin programs you’ll find widely available throughout North America. The Gold Mexican Libertad coin is well known, but that hasn’t forced the Mexican Mint into striking the coins in greater volume, which makes for a great collector’s piece as a result. The 2017 1/20 oz Proof Gold Mexican Libertad Coin is available to you online today at Silver.com.

The Mexican Mint has only offered the Proof Gold Libertad in three years outside of its current 2005-present production run. The first was the 1 oz gold coin in 1983, followed by the ½ oz gold coin in 1989. In 2004, the ¼ oz coin was offered on its own and for the first time, with full coining of five weights starting in 2005 and continuing to this day.

2017 1/20 oz Proof Gold Mexican Libertad Coins have been available in every year since 2005 with extremely low mintage figures. Comparatively speaking, the 1/20 oz is often the lowest mintage or tied with the 1 oz for the low mintage figure in the series. The 1/10 and ¼ oz coins have proven, historically, to be the most popular.

The all-time low for 1/20 oz Proof Gold Libertad production came in 2014 when just 250 coins were struck. That was a low year for all weights in the proof version, with only the ¼ oz coin not featuring a mintage of 250, albeit it was still a very low 350 coins. The highest mintage occurred last year in 2016 when 2,100 coins were struck across all five weights.

On the obverse of all 2017 1/20 oz Proof Gold Mexican Libertad Coins you’ll find the image of Winged Victory perched atop the Mexican Independence Victory Column. Erected in the center of Mexico City in 1921 to celebrate the nation’s centennial of independence, the column is topped by a 22-foot tall statue of the Angel of Independence.

The reverse of the 2017 1/20 oz Proof Gold Libertad features the modern coat of arms for Mexico. It depicts an eagle atop its perch on a cactus branch as it is locked in combat with a snake.

Gold Libertad coins are struck by the Mexican Mint, which is controlled by Banco de Mexico. The sovereign mint of the nation, it produces both bullion and commemorative coinage, as well as circulation coins and banknotes.

We encourage Silver.com shoppers to contact our customer service team with questions. You can reach us at 888-989-7223, chat with us live online, or email us directly.