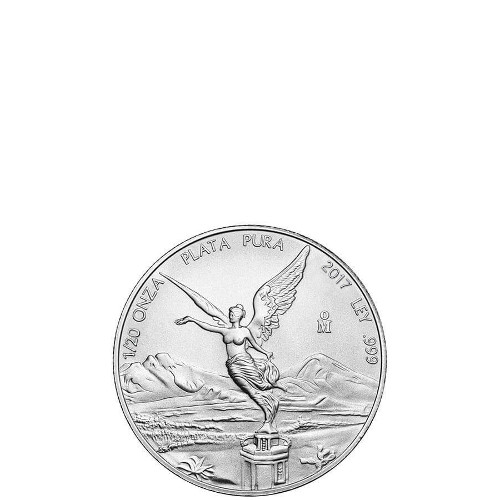 Fractional-weight Silver Libertad coins have not always been available from the Mexican Mint. These coins originated in 1991, while the 1 oz coin in the series was first offered by the mint in 1982. The 1/20 oz Silver Libertad has long proven among the most popular of the fractional-weight coins, beat out in most years only by the 1/10 oz mintage.

Each of the 2017 1/20 oz Silver Mexican Libertad Coins in this product listing is available to you in BU condition. Coins in this condition show no signs of wear and tear, though you may notice minor flaws ranging from breaks in the luster and spotted surfaces to contact marks from the coining process.

Like all of the other silver coins in the Silver Libertad collection, the 1/20 oz Silver Libertad saw its highest mintage figure in just its second year of availability. Total mintage in 1992 was 295,783 coins, with its low point coming in 2007 at just 3,500 coins produced. There were also no 1/20 oz coins struck at all in 2012.

The obverse of all Silver Mexican Libertad coins include the image of Winged Victory. This symbol of Mexican resistance and independence originated in the 1820s during the nation’s hard-fought, eight-year war of independence against their Spanish colonial oppressors. It is accompanied by engravings of the year of issue, weight, purity, and metal content, as well as the mint mark of the Mexican Mint.

On the reverse of all 2017 1/20 oz Silver Mexican Libertad you’ll find the image of the nation’s coat of arms. It features a cactus in the center which hosts a bald eagle as it battles a serpent, with the eagle representing Mexico as it struggles to free itself from the entanglements of Spanish colonialism.

The Mexican Mint is the Western Hemisphere’s oldest operating facility, and was founded by Spanish conquistadors in 1535. Today it is operated by Banco de Mexico as the official sovereign mint of the nation.

Please don’t hesitate to contact Silver.com with questions. You can reach us on the phone at 888-989-7223, connect with us online through our live chat, or simply send us an email with your inquiries.