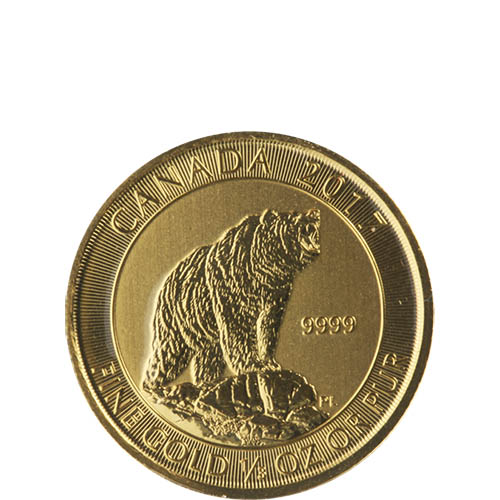 The grizzly bear is a common fixture on Canadian coin programs, but this particular product boasts something unique even with its distinctive grizzly bear. This 2017 coin marks the first-ever issue of a 1/3 oz gold coin from the Royal Canadian Mint. Right now, 2017 1/3 oz Gold Canadian Grizzly Bear Coins are available to purchase online at Silver.com.

Each 2017 1/3 oz Gold Canadian Grizzly Bear Coin in this listing debuted as the first-ever coin of this weight from the Royal Canadian Mint. Each individual coin comes in Brilliant Uncirculated condition and is available individually inside of protective plastic pouches.

On the obverse of 2017 1/3 oz Gold Canadian Grizzly Bear Coins is the portrait of Queen Elizabeth II. Her Majesty is featured here in right-profile relief with earrings and no crown on her head. This image was created in 2003 by Susanna Blunt as the fourth-generation design on Canadian coins. This is just the second design from a Canadian artist.

The reverse of 2017 Gold Canadian Grizzly Bear Coins features the image of a giant grizzly bear standing on the edge of a rock cliff. Generally speaking, the grizzly bears on the North American continent reach larger sizes when living near coastal environments compared to those living further inland.

Grizzly bears, as they are commonly known in the United States and Canada, gained their name following the expedition of Meriwether Lewis and William Clark. The duo described encountering a “grisly” bear, an English term that at the time could be interpreted as “fear-inspiring” or “gruesome.”

If you have any questions about gold for sale, please contact Silver.com. Our customer service team is available at 888-989-7223, online using our live chat, and via our email address.