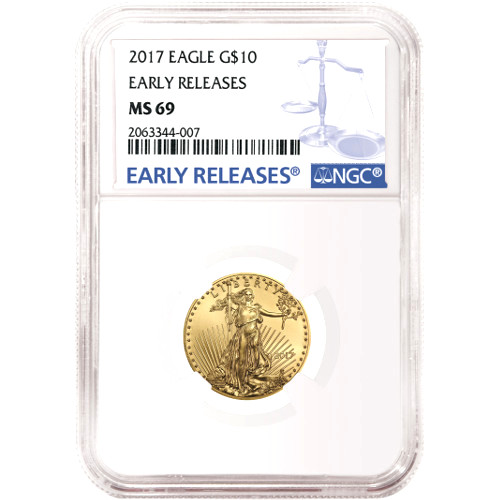 There are few images from American history more iconic than those of Liberty and the bald eagle. A modern interpretation of Justice, from antiquity, Liberty represents the fundamentals and beliefs of the nation. The bald eagle, America’s national emblem since 1792, characterizes majesty, power, and longevity. Both icons feature prominently on the nation’s official gold bullion coin. The 2017 ¼ oz Gold American Eagle Coin is available today online at Silver.com.

Augustus Saint-Gaudens is the man behind the design used on the obverse face of the Gold American Eagle coin. His Lady Liberty depiction was created in 1907 and was eventually used on the $20 Gold Double Eagle from 1907 to 1933.

Saint-Gaudens was one of a handful of artists responsible for the complete overhaul in the design of American currency in the early 20th century. What sets Saint-Gaudens apart is his place in the process. He was the very first man chosen to lead the redesign effort, having been hand-picked by President Theodore Roosevelt in 1905.

On the obverse you’ll find the most beloved coin design from American history. Augustus Saint-Gaudens was personally chosen by President Theodore Roosevelt to lead the charge in redesigning American gold coins. His image of Liberty appeared on the $20 Gold Double Eagle from 1907 to 1933.

The reverse bears Miley Busiek’s depiction of the American bald eagle. In her design, a male eagle is shown flying over the nest, which contains a group of hatchlings under the watchful eye of a female eagle.

All 2017 ¼ oz Gold American Eagles listed here are near-perfect specimens from the NGC. Coins with a Mint State 69 grade show full, original mint luster and a maximum of two minor detracting flaws, which are limited to miniscule hairlines or contact marks found outside of the primary focal areas of the coin.

The Early Release designation identifies coins that are shipped to the PCGS and arrive at their depositories within the first 30 days of the 2017 issue date set by the US Mint for Gold American Eagle coins.

Early Release designation gold coins are sought after in anticipation for gold’s continued historic value, which you can monitor minute by minute via our gold spot price chart.

We encourage all Silver.com shoppers to contact us with questions. Our team members are available at 888-989-7223, online using our live web chat service, and via our email address.