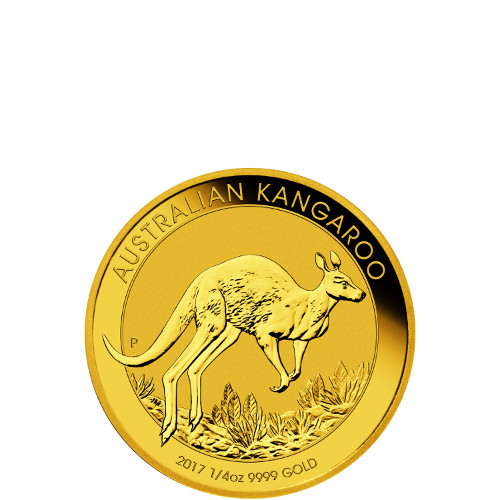 The Perth Mint is well-known for producing annual bullion coin programs with changing design schemes on the reverse each year. Further, these coins tend to focus their motif on native species that call the continent home. One of its most beloved coin programs is the Gold Australian Kangaroo, with the 2017 ¼ oz Gold Australian Kangaroo Coin available today on Silver.com.

On the obverse side of every 2017 ¼ oz Gold Australian Kangaroo Coin is the image of Queen Elizabeth II. Her Majesty’s right-profile portrait has featured on the obverse of all Australian, British, and commonwealth coins since her coronation in 1953. This particular depiction is a 1998 creation by Ian Rank-Broadley, representing the fourth-generation image of the Queen.

The reverse of these 2017 Gold Australian Kangaroo Coins features the image of one kangaroo as it hops from left to right across the design field of the coin. It includes engravings of “Australian Kangaroo,” the coin’s year of issue, weight, purity, and metal content, and the Perth Mint’s “P” mint mark.

Kangaroos are beloved animals in Australia. They were not seen by the outside world until British explorers reached the continent in the 18th century. Kangaroos are the world’s largest marsupials, and move with the help of two muscular hind legs and a powerful tail for balance.

Each 2017 ¼ oz Gold Australian Nugget Coin in this listing is in BU condition. Coins in this condition exhibit no signs of wear and tear, but may feature minor flaws ranging from breaks in the luster and spotted surfaces to contact marks from the coining process.

Located in Perth, Western Australia, the Perth Mint is a state-owned entity of the local state government. Originally part of the Royal Mint system, today it operates separate of the Royal Australian Mint, which was founded in 1965 through the Currency Act of 1965. That same act gave Perth Mint coins legal tender status.

Silver.com customer service team members are available to answer your questions at 888-989-7223. You can also connect with us online using our live web chat and email features.