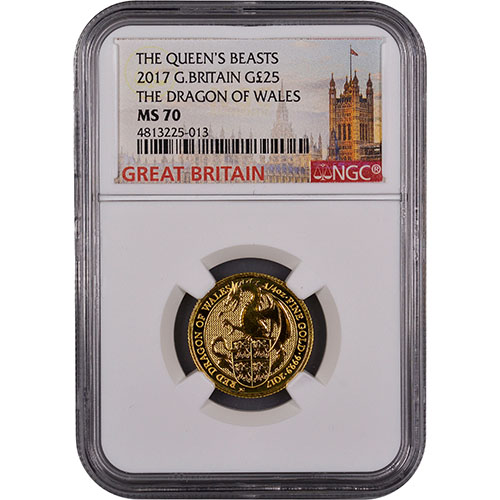 There are many prominent heraldic beasts in the history of Britain’s Royal Arms. Each of the fantastical creatures came to the Royal Arms from a different monarch, and each is connected to the ruling monarch Queen Elizabeth II through hundreds of years of royal heritage. The silver and gold bullion coins of the Queen’s Beast Series present these beasts in stunning relief from the Royal Mint. Right now, 2017 ¼ oz Gold British Queen’s Beast Dragon Coins are available to purchase online at Silver.com in perfect condition.

The Red Dragon of Wales came to the royal arms through Owen Tudor, whose son would eventually reign as King of England as King Henry VII. The King’s troops carried the fiery red dragon standard into war at the Battle of Bosworth, a battle which secured the crown of England for Henry VII.

On the reverse of these 2017 ¼ oz Gold British Queen’s Beast Dragon Coins is the image of the Red Dragon of Wales. A red dragon featured on a field of green and white is the official design of the House of Tudor, one of England’s most powerful ruling families in its history. The Red Dragon is often depicted with a quartered shield that holds red leopards in two quadrants and gold leopards in the other two. This is the arms of Llewelyn ap Griffith, the last native prince of Wales.

The obverse of 2017 Gold British Queen’s Beast Dragon coins includes the right-profile portrait of Queen Elizabeth II. Her Majesty is connected to the Red Dragon in more ways than one. Not only is it a part of her lineage as the Queen of England, but she had a personal hand in elevating the Red Dragon to the official flag of Wales in 1959.