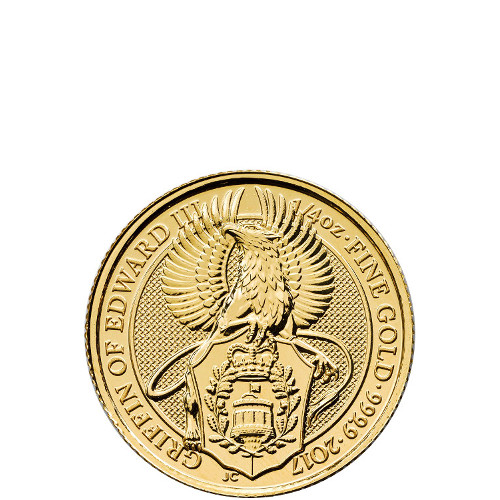 The British Queen’s Beast Collection is an exciting 10-coin series that chronicles the animals of heraldry in the British monarch. This particular collection focuses on 10 statues that were carved and present during Queen Elizabeth II’s coronation to the British throne back in 1953. Following the release of the Lion of England, the Griffin takes center stage in the second release. Right now the 2017 ¼ oz Gold British Queen’s Beast Griffin Coin is available to purchase online today from Silver.com.

Each 2017 ¼ oz Gold British Queen’s Beast Griffin Coin listed here at Silver.com is in BU condition. Coins in BU condition exhibit no signs of wear and tear, though you may notice minor flaws such as breaks in the luster, spotted surfaces, or contact marks from the coining process.

King Edward III ruled over Britain for more than 50 years, making him one of the longest reigning monarchs in British history. The Griffin was closely associated with his reign, and even featured on his private seal. Now it is included in the Queen’s Beast Collection of coins.

On the obverse of the 2017 ¼ oz Gold British Queen’s Beast Griffin Coin is the right-profile portrait of Queen Elizabeth II. Designed in 2015 by Jody Clark, this is the fifth-generation depiction of the Queen used since 1952.

The reverse of all 2017 ¼ oz Gold British Queen’s Beast Griffin Coins includes the design of a griffin standing with its front talons perched atop the seal of Edward III and its wings spread wide above its head. This side includes the engravings of “Griffin of Edward III” and “1 oz Fine Gold 9999 2017.” Jody Clark’s initials of “JC” are also engraved on this face.

If you have any questions, please don’t hesitate to contact Silver.com. Our customer service team is available at 888-989-7223, online using our live web chat, or via our email address.