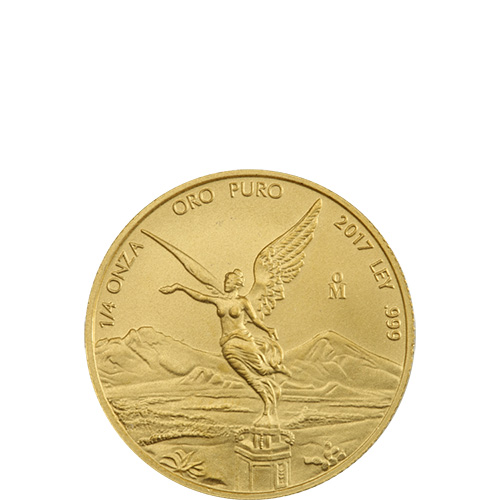 One of the most popular gold coins for sale in North America is the Gold Mexican Libertad coin. The official gold bullion product of the Mexican Mint, the Gold Libertad coins are available in five different weights each year with bullion and proof options released with each new year of availability. Right now, 2017 1/4 oz Gold Mexican Libertad Coins are available to purchase online at Silver.com.

Each 2017 1/4 oz Gold Mexican Libertad Coin in this listing is in BU condition. Coins in BU condition exhibit no signs of wear and tear, but you may find a variety of minor flaws. These flaws include breaks in the luster, spotted surfaces, and contact marks from the coining process at the mint.

Gold Libertad coins are unique among their gold bullion counterparts in that they feature no set face value. The coins are not issued a set face value, but instead have a floating face value that would require contacting Banco de Mexico if the coins were ever to be used to settle commercial debts.

The 1/4 oz Gold Libertad is one of the three available options that have been on the market since 1981. The initial release included the 1/4 oz Gold Libertad, as well as a 1/2 oz and 1 oz option. The coins were available for just one year before a decade-long discontinuation and other future disruptions. Since 2002 though, the coins have been struck and released each year.

On the obverse of all 2017 1/4 oz Gold Mexican Libertad coins you’ll find the image of Winged Liberty from the top of the Mexican Independence Victory Column. Erected in the center of Mexico City in 1921, the column celebrated the centennial anniversary of Mexican independence and featured the 22-foot statue of Winged Victory.

The reverse of all 1/4 oz Gold Libertads includes the nation’s coat of arms. The Mexican coat of arms includes a bald eagle locked in battle with a snake while perched on a cactus. This is the modern version of the coat of arms, with 10 historic designs preceding it.

Banco de Mexico oversees the daily operations of the Mexican Mint, with the federal government controlling overall mint operations. The Mexican Mint was founded in 1535 by Spanish conquistadors.

If you have any questions, Silver.com customer service is available to help. You’ll find us on the phone at 888-989-7223, on the web using our live chat, and via our email address.