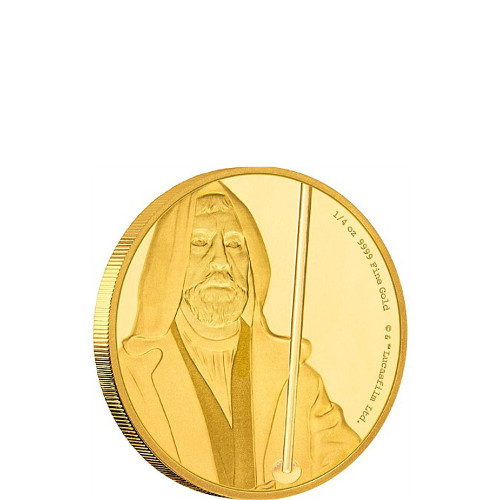 Obi-Wan Kenobi is one of the most revered and beloved characters from the Star Wars franchise. In fact, only Yoda was a more celebrated fan favorite among moviegoers than the humble Obi-Wan Kenobi. Portrayed by actor Alec Guinness, he only appeared in the flesh as Obi-Wan Kenobi in Star Wars: A New Hope. The 2017 ¼ oz Gold Niue Star Wars Obi-Wan Kenobi Coin is available now at Silver.com.

One of the most popular characters from the original Star Wars trilogy of films was Obi-Wan “Ben” Kenobi. Kenobi’s character appeared first in the original trilogy as an older version of himself, portrayed by actor Alec Guinness as one of the few remaining Jedi in the universe, and famously had a show down early on with Darth Vader.

Fast forward to the late 1990s when the prequel trilogy of Star Wars films came out, and the world was introduced to a younger Ben Kenobi who was himself a young Jedi teaching an even younger Anakin Skywalker, who would go on to become Darth Vader. The younger Obi-Wan was portrayed by actor Ewan McGregor.

The reverse of all 2017 ¼ oz Gold Niue Star Wars Obi Wan Kenobi Coins features the image of Obi-Wan in his Jedi robes as he draws his lightsaber to face Darth Vader on the Death Star. This is one of the iconic moments from the first film, Star Wars: A New Hope.

On the obverse of the Star Wars Gold Classic Collection coins you’ll find the image of Queen Elizabeth II. This right-profile portrait of the Queen has appeared on the obverse of all commonwealth coins since Ian Rank-Broadley designed it in 1998 as the fourth-generation depiction of Her Majesty.

New Zealand Mint is a private mint located in the city of Auckland. The mint is responsible for production of bullion coinage for numerous South Pacific nations, but is not associated with the New Zealand government.

We encourage all Silver.com shoppers to contact us when necessary. Our customer service associates are available at 888-989-7223, or you can connect with us on the web through our live chat and email features.