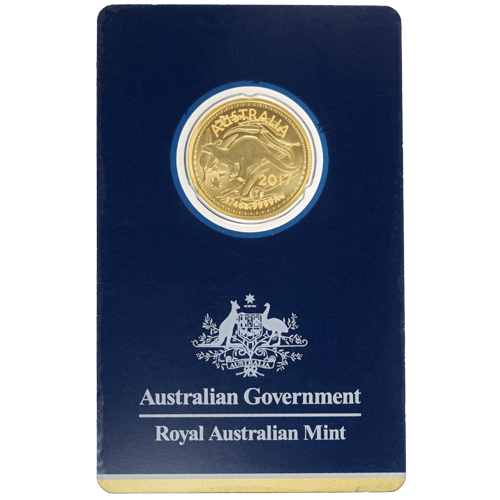 All 2017 ¼ oz Gold Royal Australian Mint Kangaroo coins in this listing feature BU condition. Coins in BU condition show no signs of wear and tear, though you may notice minor flaws including breaks in the luster, spotted surfaces, and contact marks as a result of the striking process during production.

Gold Royal Australian Mint Kangaroo coins revive one of the nation’s most popular historic coinage designs. The copper penny issued by the nation between 1938 and 1964, with a reverse design featuring the kangaroo and the Commonwealth Star. This design was used as part of the Australian pound in the Commonwealth of Australia, and was removed from circulation in 1966 following decimalization with passage of the Currency Act of 1965.

The Royal Australian Mint works with PAMP Suisse to deliver these 2017 ¼ oz Gold Royal Australian Mint Kangaroo coins to you in BU condition inside of the Swiss refiner’s patented, sealed assay packages that include Veriscan technology. Unique as a fingerprint, Veriscan technology creates a one-of-a-kind online ID for your coin using the individual topography of the precious metal coins.

On the obverse of the Royal Australian Mint Kangaroo coins you’ll find the latest available effigy of Queen Elizabeth II. The right-profile portrait in question on these Gold Kangaroos comes from Ian Rank-Broadley, and was created in 1998 as the fourth-generation depiction used since her ascension to the throne of England in 1952.

The reverse of the 2017 ¼ oz Gold Royal Australian Mint Kangaroo Coin features the image of the red kangaroo, a distinct subspecies on the continent, hopping across the design field. Includes added imagery from the copper penny of the Tasmanian Blue Gum’s leaves, nuts, and flowers as a frame around the design field.

The Royal Australian Mint was founded in 1965 as part of the Currency Act of 1965. The official sovereign mint, it relieved the Perth Mint and Melbourne Mint, former British Royal Mint locations, of the duties of striking Australian coinage.

If you have any questions, please don’t hesitate to contact Silver.com at 888-989-7223. You can also connect with us online using email and live chat. If you are looking for similar products, please check out our selection of Australian Gold Coins.