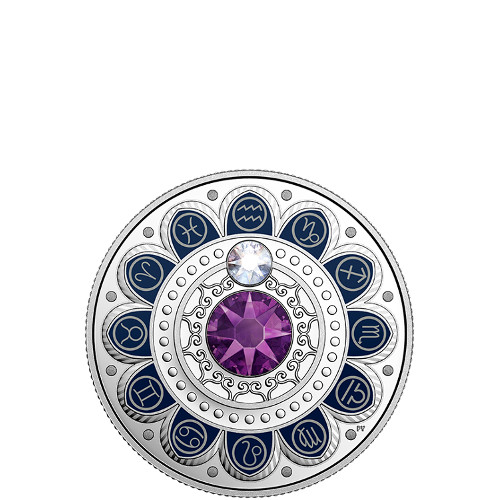 The 12 signs of the Zodiac intrigue those who believe in its powers of foresight, and entertain those who read about them. The Royal Canadian Mint has a beautiful 12-coin series in development that debuted in 2016 depicting the signs of the Zodiac, with each one getting its time in the limelight. Right now, the 2017 ¼ oz Silver Canadian Zodiac Aquarius Coin is available to purchase online at Silver.com.

Each 2017 ¼ oz Silver Canadian Zodiac Aquarius Coin in this collection arrives in the Royal Canadian Mint’s classic maroon clamshell for beautiful display, and includes a numbered Certificate of Authenticity.

The Royal Canadian Mint’s Zodiac series of coins launched in December 2016 with the Capricorn symbol, and continues now with the ¼ oz Silver Canadian Zodiac Aquarius coin. This will be followed by releases of the Pisces and Aries coins, followed by the launch of a new coin each month through the Sagittarius release in November 2017.

On the reverse of the 2017 ¼ oz Silver Canadian Zodiac Aquarius Coin is the image of all 12 Zodiac symbols, the Aquarius symbol lined up at the top and a Swarovski crystal aligned with it in the circular shape. The Aquarius represents those born from January 21 to February 19, and are known for intelligence, creativity, and progressiveness.

The obverse of all 2017 ¼ oz Silver Canadian Zodiac Aquarius Coins includes the image of Queen Elizabeth II, captured in right-profile relief by Susanna Blunt. This particular effigy was created in 2003 and began appearing on Canadian coinage in 2004.

Zodiac Series coins from the Royal Canadian Mint are exciting and altogether different coins for collectors. Zodiac-themed silver bullion coins all feature the same design concept on the reverse, with minor changes to each one that highlight the particular Zodiac symbol for the release period.

If you have any questions, please don’t hesitate to ask. Silver.com associates are available to help at 888-989-7223, online using our live web chat, or via our email address.