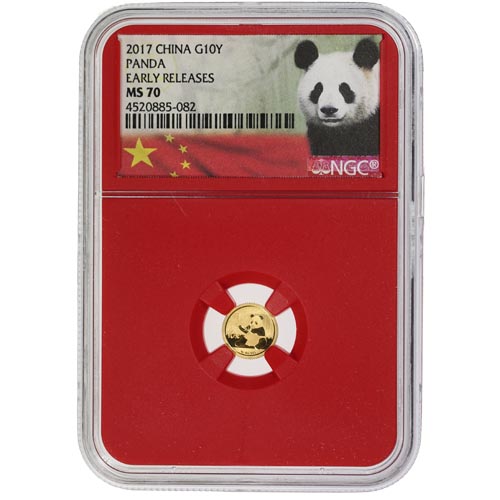 The Gold Panda coin series from the Chinese Mint is a highly-coveted gold bullion option for any investors. There’s something for every buyer in this collection, with .999 fine gold content and a new obverse design each year, the Gold Chinese Panda is great for investors or collectors. The 2017 1 Gram Gold Chinese Panda Coin is now available to you for purchase online at Silver.com.

Gold Chinese Panda coins debuted from the Chinese Mint in 1982, making it the third oldest gold bullion coin program. Only the South African Gold Krugerrand (1967) and the Gold Canadian Maple Leaf (1979) have been available to private buyers for a longer period of time.

Each year the Chinese Mint maintains interest in this official gold bullion coin by altering the design on the obverse. The panda, more so than any other living species, is closely associated with the nation of China. There is a new obverse design in the series every year, with only 2001 and 2002 featuring a repeat design.

On the obverse of the 2017 1 Gram Gold Chinese Panda Coin you’ll find the image of an adult panda as it sits on a fallen branch. The gentle giant is depicted picking at a bamboo shoot as it dines on the vegetation. Engravings include only the face value and the weight, purity, and metal content of the coin.

Each 2017 1 Gram Gold Chinese Panda Coin listed here is in Mint State 70 condition. Coins certified MS 70 by the NGC have full, original mint luster and no presence of detracting flaws. The Early Release designation of these coins indicates they were received for certification at the NGC within 30 days of their 2017 issue date.

Additionally, these coins arrive in special red core labels from the NGC. Inside the standard crystal-clear, EdgeView holder from the NGC is a vivid red label that brings something extra to your product while on display.

We encourage Silver.com customers to contact us at 888-989-7223 with questions or connect with us online through our live chat and email.