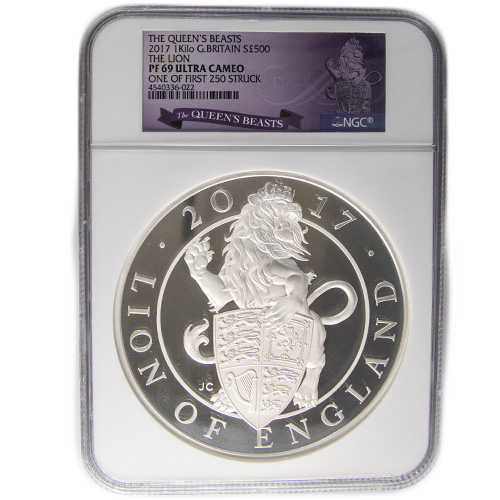 This special corn release for 2017 has been manufactured and produced by the exclusive Great Britain Label to begin a truly memorable coin collection. The series has been made to honor Queen Elizabeth II’s reign as a famous leader and historic figure. Currently, the 2017 1 Kilo Proof Silver British Queen’s Beast Lion Coin NGC PF69 can be purchased online from Silver.com.

The 2017 1 Kilo Proof Silver British Queen’s Beast Lion Coin NGC PF69 has been struck in 99.9% fine silver and is considered a legal tender of Great Britain. The grading of PF69 from the NGC means that this coin is considered a near-perfect specimen, but contains a maximum of two minor flaws. These flaws are usually minuscule contact marks or hairlines that must be outside the central focal point of the coin. This coin release also has a proof quality, so the background of the coin is mirrored while the design is frosted.

The designs on the obverse and reverse of this 2017 coin released from the Great Britain Label were both created by Jody Clark. This coin for 2017 is the first in the collection, which will eventually include ten coins that highlight and honor every creature that was represented in stone at the coronation of Queen Elizabeth II.

On the obverse of the 2017 1 Kilo Proof Silver British Queen’s Beast Lion Coin NGC PF69 is the portrait of Queen Elizabeth II. The image of Her Majesty the Queen has been shown on many different products in the bullion market worldwide to honor her as a historical figure and renowned leader. The 2017 coin is no different; in the image, Queen Elizabeth II is shown wearing earrings and a diadem.

A lion holding a shield is shown on the reverse design of the 2017 1 Kilo Proof Silver British Queen’s Beast Lion Coin NGC PF69. The lion itself stands on its hind legs, extending one of its paws and roaring loudly into the sky. There are four different quadrants on the shield that symbolize the three countries of Great Britain, which are Ireland, Scotland, and England. The lion also wears a crown on its head. The coin’s reverse also shows its release year and the “LION OF ENGLAND” inscription.

If you have any additional questions about silver for sale, our team at Silver.com is here to help. Give us a call at 888-989-7223, or reach out to us using our email or online live chat features.