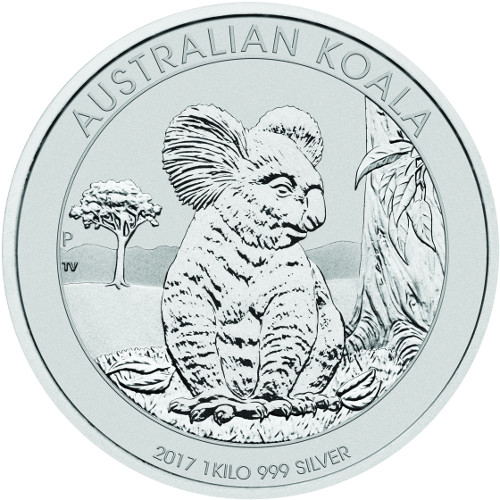 The Australian Silver Koala coin is one of the most popular annual releases from Australia’s Perth Mint. The Koala is part of a greater series of bullion coins featuring the continent’s unique wildlife species, including the long-standing Australian Silver Kookaburra and all-new Australian Silver Kangaroo. Today, the 2017 1 Kilo Silver Australian Koala Coin is available to you online at Silver.com.

There are a lot of misconceptions outside of Australian when it comes to the koala. First among them, the name “koala bear.” Much like the beloved kangaroo, the koala is actually a marsupial and is a largely nocturnal animal that sleeps up to 18 hours in a given day. Additionally, the cuddly image of the koala is misleading. When tested, the animals have the capacity to defend themselves with a nasty temperament.

2017 1 Kilo Silver Australian Koala coins mark the 10th anniversary release of the beloved koala coin, which has enjoyed a strong run over the past decade with these coins featuring the 11th new design used in the series.

The reverse of the 2017 1 Kilo Silver Australian Koala coin includes the brand-new koala design for this year. It depicts the beloved marsupial sitting at the base of a eucalyptus tree on the Outback, with engravings of the coin name above the design field and its year of issue, weight, purity, and metal content below.

Each 2017 1 Kilo Silver Australian Koala coin here is in BU condition. Coins in this condition have no signs of wear and tear on the surfaces, though you are likely to notice a range of minor flaws that include breaks in the luster, spotted surfaces, or contact marks resulting from striking at the mint.

Perth Mint was founded in 1898 as the third and final facility in London’s Royal Mint system on the continent. The facility is now owned and operated by the government of Western Australia, and though not affiliated with the Royal Australian Mint, its coins enjoy legal-tender status under the Currency Act of 1965.

Please direct your questions to a Silver.com associate. Our team members are available at 888-989-7223, online using our live chat, or via our email address.