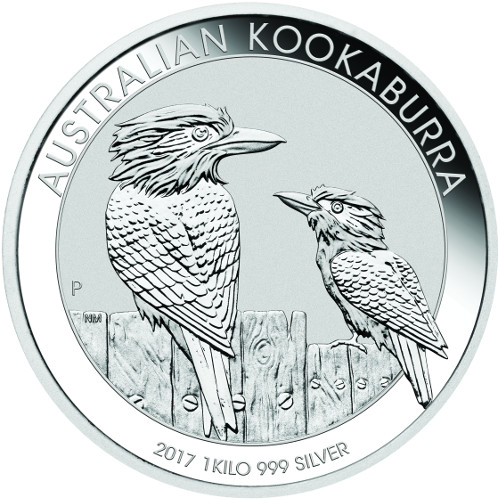 Kookaburras are the largest members of the kingfisher species of birds, which are endemic to the Australian continent and well known for their human-like native call, which mimics the sound of laughter in human beings. Today, the 2017 1 Kilo Silver Australian Kookaburra Coin is available online from Silver.com.

The Silver Australian Kookaburra coin was first released in 1990 as part of a groundbreaking shift in the Perth Mint’s annual bullion releases. The largest previous release was the annual Gold Nugget coin, but starting in 1990 the Gold Nugget became the Gold Kangaroo following the lead of the Silver Kookaburra.

These two coins formed the crux of the Perth Mint’s offering, highlighting the unique animal species of Australia with new designs available on the reverse of the coins each year. The coin offerings from Perth Mint only grew in the 2000s, with the addition of the Silver Australian Koala in 2008 and the Silver Australian Kangaroo bullion coin in 2016, featuring .9999 pure silver for the first time.

On the obverse of all 2017 1 Kilo Silver Australian Kookaburra Coins you’ll find the right-profile portrait of Queen Elizabeth II. Her Majesty’s effigy appears on all Australian, British, and commonwealth currency obverse faces. This current design is from Ian Rank-Broadley and was created in 1998.

The reverse of the Silver Australian Kookaburra features an all-new design for 2017. It depicts a pair of kookaburras sitting on the top of an uneven section of wooden fence, with distressed signs in the wood visible in the details as well as the individual, flathead screws.

All 2017 1 Kilo Silver Australian Kookaburra coins in this Silver.com listing have a BU condition. Coins in BU condition show no signs of wear and tear, though you may notice minor flaws that include breaks in the luster, spotted surfaces, and potential contact marks from striking during the production process.

The Perth Mint was opened in 1899 as the third and final Royal Mint System facilities on the continent. Following the closure of the Sydney Mint, the Perth and Melbourne Mints served as de facto sovereign mints for Australia until the passage of the Currency Act of 1965, which established the Royal Australian Mint.

Please direct your questions to a Silver.com associate at 888-989-7223, chat with us live online, or send us an email with your questions.