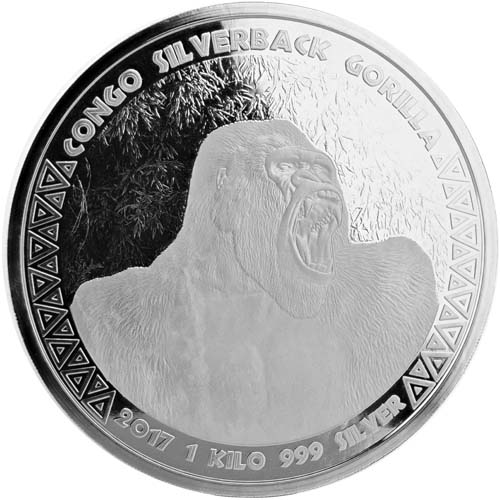 Silverback gorillas were once a mysterious creature not actually believed to exist, but instead considered a myth of the local tribes in Central Africa. It wasn’t until the 1850s that Europeans found full skeletons to establish the creature’s identity, with further scientific studies not even conducted on the creatures until the 1920s.

Gorillas are split into two distinct species of western and eastern gorillas, with the western gorillas slightly smaller in overall size compared to their eastern counterparts. The gorilla species as a whole is widely recognized as the largest living primate species.

All 2017 1 Kilo Silver Congo Silverback Gorilla Coins in this listing are in BU condition. Coins in BU condition have no signs of wear and tear, though you may notice minor flaws ranging from breaks in the luster and spotted surfaces to contact marks. These minor flaws are a result of the production process at the mint.

The obverse of the Silverback Gorilla Series always includes the image of one of the gorillas. Silverbacks are the elder males in a gorilla family network, which is referred to as a troop. The silverback is the guardian male who often decides where the family will forage and sleep, as well as where to move.

On the reverse of the 2017 1 Kilo Silver Congo Silverback Gorilla Coin you’ll find the coat of arms for the Republic of Congo. This image includes a heraldic lion on a shield, flanked on either side by the head of an elephant with the nation of issue and national motto included in the overall design field.

The Scottsdale Mint issues these 2017 1 Kilo Silver Congo Silverback Gorilla coins for the first time ever in this weight. The mint is a private facility located in Arizona, and has an increasingly popular portfolio of foreign silver bullion coins issued in conjunction with other governments.

Please don’t hesitate to contact Silver.com if you have questions. You can reach our customer service team at 888-989-7223, chat with us live online, or simply send us an email with your inquiries.