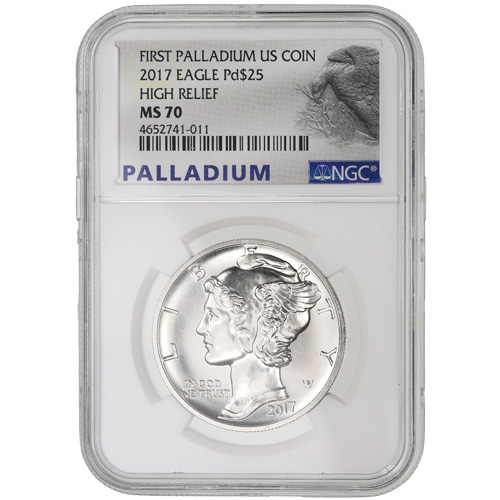 The Palladium Eagle is the newest bullion coin offered by the United States Mint in its famed American Eagle collection. Joining the Silver Eagle, Gold Eagle, and Platinum Eagle is the new 1 oz Palladium Eagle that features a purity level of .9995 fine palladium content. The 2017 1 oz Palladium American Eagle Coin is now available to you for purchase online at Silver.com in perfect condition!

Palladium American Eagle coins were actually authorized by Act of Congress in 2010, but the United States Mint was not able to act on producing the coins until 2017. The Palladium Eagle is the first-ever investment-grade palladium coin from the United States. Like its counterparts in the Eagle Series, its weight, content, and purity are guaranteed by the US government.

Adolph A. Weinman becomes the first designer to have images appear on both sides of a coin in the American Eagle series. His Walking Liberty graces the obverse of the Silver Eagle, but its reverse has a design from former Chief Engraver John Mercanti. Likewise, the Gold and Platinum Eagles have designs from different artists on either side.

The Palladium American Eagle’s obverse side features the image of Liberty in left-profile relief. This design was created in 1916 and is known as Winged Liberty. It originally appeared on the nation’s 10-cent piece, and was known in its day as the Mercury Dime because his artwork rendered Liberty in a style similar to the Roman messenger god Mercury.

On the reverse of the 2017 1 oz Palladium American Eagle you’ll find another design from Weinman, one which has never appeared on an American coin before. Created in 1907, this image of the bald eagle clutching onto a branch on a rocky ledge was used on the American Architect Institute’s Gold Medal in 1907.

All of the 2017 1 oz Palladium American Eagles listed here are in perfect condition. Coins with a Mint State 70 grade from the NGC maintain full, original mint luster and bear no detracting flaws of any kind on the surface areas of the coin.

We encourage Silver.com customers to reach out to us with questions. You can call us at 888-989-7223, chat with us live online, or simply send us an email with your inquiries.