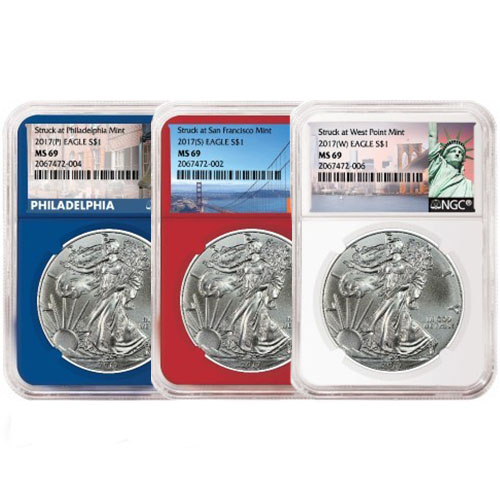 Silver American Eagle coins are a popular choice among silver coins for sale each year. The official silver bullion coin of the United States is offered each year by the United States Mint in bullion, proof, and burnished versions with just a 1 oz coin available. Today, 2017 1 oz Silver American Eagle Coins are available to you online at Silver.com with an NGC certification.

The Silver American Eagle coin was first struck by the San Francisco Mint when the coins were introduced in 1986. Since that time, three of the four US Mint locations have produced the coins. They were struck by the Philadelphia Mint late in the 1990s, and have been at the West Point Mint since the 2001 issue. Only the Denver Mint has not made contributions.

In this listing you can purchase a 3-coin set of 2017 Silver American Eagle coins. Though there are no mint marks denoting it, each of these coins came from one of the three mints. With increased demand for silver, the San Francisco Mint and Philadelphia Mint now offer supplemental coining of Silver Eagles to aid the West Point Mint. This set has one coin from each of those mints. Inside the label for each individual coin is an image of the mint that it originated from, with one each for the San Francisco, West Point, and Philadelphia Mints.

On top of that, each coin was certified Mint State 69 by the NGC. The coins have full, original mint luster and a maximum of two minor detracting flaws, such as minuscule hairlines or contact marks. The coins ship with a gasket around the coin’s edge inside the slab using the colors red, white, and blue like the American flag.

The obverse of all 2017 Silver American Eagle Coins includes Walking Liberty. Designed by Adolph A. Weinman in 1916, her figure appeared on the half-dollar coin until 1947 when it was replaced by the effigy of Benjamin Franklin.

On the reverse of the 2017 1 oz Silver American Eagles in this three-coin set is the heraldic eagle. Refined in 1986 by US Mint engraver John Mercanti, the image features a bald eagle behind the heraldic shield of the US.

Please feel free to contact Silver.com with questions. You can call us on the phone at 888-989-7223, or connect with us online through our live chat and email options.