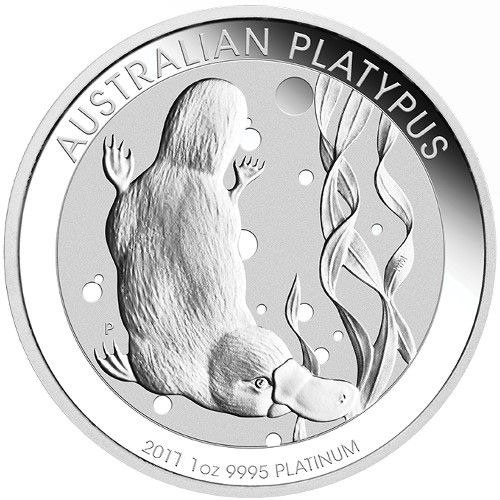 Platinum Australian Platypus coins were introduced in 2011, and all 30,000 of the coins from that year sold out. After limiting mintage in the first two years of production, the Perth Mint has since adopted an unlimited mintage (or mint-to-order) approach for the program.

The Platinum Australian Platypus coin is an annual bullion program similar to its well-known silver counterparts. A unique animal species native to the Australian continent, the platypus, is the primary inspiration for the coin’s design. However, while those other coin programs rotate the design features each year on the reverse, the Perth Mint uses the same platypus design each year.

On the reverse of the 2017 1 oz Platinum Australian Platypus is the image of the venomous mammal as it swims in the water. Engravings on this face of the coin are limited to name of the coin issue, as well as its year of issue, weight, purity, and metal content. The platypus also happens to be one of the few venomous mammals in the world, with males possessing a spur on their hind foot that delivers a painful (though not deadly) venom.

The obverse of the 2017 1 oz Platinum Australian Platypus Coin includes the right-profile portrait of Queen Elizabeth II. The current image in use on Australian coinage is the fourth-generation depiction created in 1998 by Ian Rank-Broadley.

Each 2017 1 oz Platinum Australian Platypus Coin in this product listing is in BU condition. Coins in this condition exhibit no signs of wear and tear, though you may notice a range of minor flaws including breaks in the luster, spotted surfaces, and contact marks from the coining process.

Australia’s Perth Mint is its oldest operating facility. Originally founded in 1898 as part of the British Royal Mint system, the Perth Mint has been in Australian control since the 1970s when it was handed over to the state government of Western Australia. It operates independently of the Royal Australian Mint system, but its coins are legal tender under the Currency Act of 1965.

We encourage Silver.com shoppers to reach out to us with questions. You can contact us on the phone at 888-989-7223, online using our live chat, and via our email address.