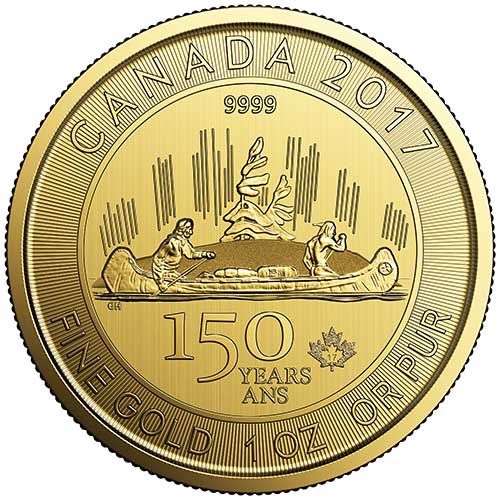 The nation of Canada first relied upon the fur trade to generate income for those settlers coming to North America from France, England, and other reaches of the European continent. Native tribes helped guide these newcomers through the forests, riverways, and other passages of the land in search of fur from various native species. Today, the 2017 1 oz Gold Canadian Voyageur 150th Anniversary Coin is available to you online at Silver.com.

The coins of the 2017 1 oz Gold Canadian Voyageur 150th Anniversary release ship inside of a sealed plastic packages the size of a credit card. These packages have the assay card associated with the coin printed on the back, featuring the guaranteed weight and fineness of your product.

All gold coins for sale in this release are in BU condition. Coins in BU condition show no signs of wear and tear, but they do also feature minor production flaws in the appearance. Common flaws include breaks in the luster, spotted surfaces, and contact marks from the production process at the mint.

The 2017 1 oz Gold Canadian Voyageur 150th Anniversary Coin from the Royal Canadian Mint marks the 150th anniversary of Canada’s confederation with the revival of a popular 1935 coin design. Released that year to mark King George V’s Silver Jubilee on the throne of England, the design was the first to appear on the nation’s inaugural silver dollar circulation release.

On the reverse of these gold coins is the image of a native tribal member at the bow of a canoe leading a European fur trader who paddles the canoe from the stern of the craft. First Nation tribes often teamed with newcomers in the early decades to help them navigate waterways in search of fur from beavers and other creatures.

The obverse of the 2017 1 oz Gold Canadian Voyageur 150th Anniversary Coin includes Queen Elizabeth II’s effigy. A portrait of Her Majesty has appeared on all Canadian, British, and commonwealth coinage since 1952. This particular design is from Canadian artist Susanna Blunt, and was created for Canadian coinage in 2003.

Please don’t hesitate to contact Silver.com if you have any questions. You can reach our customer service team at 888-989-7223, chat with us live online, or simply send us an email with your inquiries.