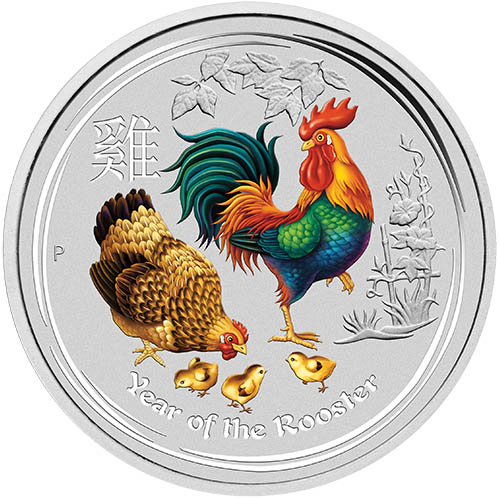 The Lunar Series II program from the Perth Mint is the most popular Zodiac-themed coin series in the world. Introduced in 2008, it is the second such program of silver and gold coins from the Perth Mint. The 2017 1 oz Colorized Silver Australian Rooster Coin is available to you today online at Silver.com.

Lunar Series II is a 12-coin release from the Perth Mint that follows the 12-year cycle of the Chinese Lunar calendar. The animals of the Zodiac appear once every 12 years, and their characteristics and personality traits are said to be passed on to the individuals born under a specific sign.

On the reverse of each 2017 1 oz Colorized Silver Australian Rooster Coin available here you’ll find the image of a rooster, accompanied by a hen and three chicks pecking around for food. Engravings read “Year of the Rooster, the Perth Mint’s “P” mint mark, and the Chinese symbol for rooster. Natural colors have been added to the primary design on this face to bring the rooster, chicken, and hens to life visually.

The obverse of the 2017 Year of the Rooster coin features the right-profile portrait of Queen Elizabeth II. Created in 1998 by Ian Rank-Broadley, this depiction remains on the obverse despite a new portrait available for commonwealth coins. The choice is designed to maintain design continuity throughout Lunar Series II.

All 2017 1 oz Colorized Silver Australian Rooster Coins in this listing are in BU condition. Silver coins in BU condition have no signs of wear and tear, however, you may notice minor flaws ranging from breaks in the luster and spotted surfaces to contact marks from the production process at the mint.

We encourage all Silver.com shoppers to contact us at 888-989-7223 with question. You can also chat with us live online or email us directly. Our website also has silver spot price charts available to view.