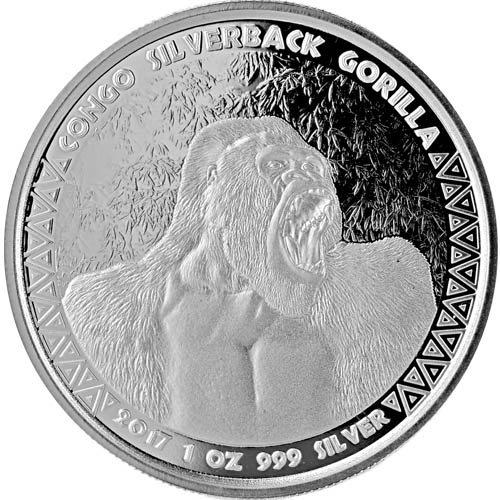 Scottsdale Mint is a private minting facility in Arizona with a growing portfolio of silver coin programs authorized through coordination with foreign reserve banks. One of its first, and most prominent, releases is the Silver Congo Silverback Gorilla collection. With new obverse designs each year, these coins are a collector’s dream. Today, 2017 1 oz Silver Congo Silverback Gorilla Coins are available to you online at Silver.com.

Depicted on the obverse of the Silver Congo Silverback Gorilla series each year is an alpha male gorilla, known as a Silverback because of its age, status, and the physical characteristic of a patch of silver fur on its back. Silverback gorillas lead the family social group, known as a troop, and will engage in vicious battles with other silverbacks when two troops clash.

Your 2017 1 oz Silver Congo Silverback Gorilla coin will ship individually inside of a protective capsule. Scottsdale Mint issues the coins in groups of five inside of sealed sheets. Each release in this series has a proof-like appearance, lending frosted elements to the visual appeal as well as mirror-like touches to the background.

The obverse of all Silver Congo Silverback Gorilla coins features the coat of arms for the Republic of the Congo. It features a shield with the image of the rampant red lion in the center holding a torch. There is a giant gold crown atop the shield and two large African elephants supporting the shield on either side. The national motto of “Unite Travail Progres” is draped along a bar supporting the elephants.

On the obverse of the 2017 1 oz Silver Congo Silverback Gorilla Coin is the imposing image of a male silverback gorilla. The Western lowland gorilla is more populous in the wild than its eastern counterpart, with more than 100,000 in existence compared to fewer than 3,800 Eastern lowland gorillas as of 2016.

Please feel free to reach out to Silver.com with questions. We’re available on the phone at 888-989-7223, online using our live chat, and via our email address. Live silver prices are updated throughout the day on our homepage!