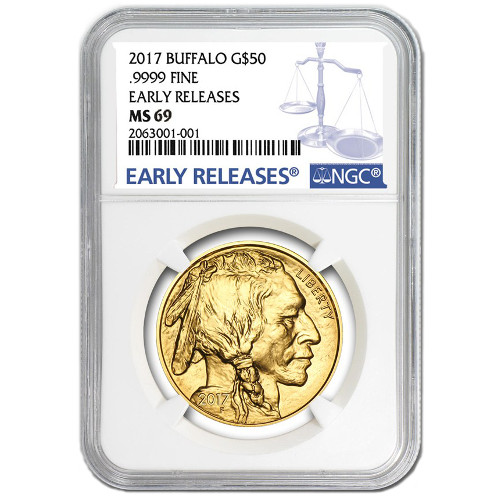 The United States Mint creates some of the most sought-after coin programs in the world today. Many of its famous designs available today enjoy popularity based upon a sense of nostalgia, with many of its best-selling coins featuring historic designs from circulation currency produced in the United States, such as the Buffalo Nickel. Today, the 2017 1 oz Gold American Buffalo Coin is available with certification online at Silver.com.

In the course of United States Mint history, there had never been a 24-karat gold coin released into circulation by the mint. From 1792 to 1837, the US Mint had used the crown gold standard for coin purity, which was effectively .925 gold. Starting in 1837 and continuing until 1986, all US Mint coins contained only .900 fine gold.

The 2017 1 oz Gold American Buffalo coin in this listing has a Mint State 69 grade from the NGC. Each of these coins has its full, original luster from the mint, but also features a maximum of two minor detracting flaws. These flaws are visible only under magnification and exist outside the primary focal areas of the coin.

An Early Release coin is one that the NGC has verified was received by its depository, or an authorized third-party depository, within the first 30-day window of the release date for 2016 coins set by the United States Mint.

On the obverse of all 2017 1 oz Gold American Buffalo coins is the right-profile portrait of a tribal chieftain. Engravings of “Liberty” and the year of issue are featured on this face. The reverse of the 2017 1 oz Gold American Buffalo coin bears the image of Black Diamond, along with engravings of the coin’s face value, weight, metal content, and purity.

Please don’t hesitate to reach out to Silver.com with any questions. You can reach our customer service team at 888-989-7223, connect with us online using our live chat, or send us an email with your inquiries.