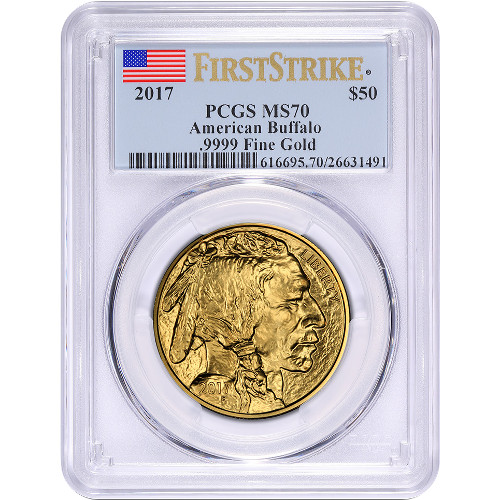 The Gold American Buffalo coin was authorized by the US Congress in December 2005. America’s sovereign coin program was one of the few in the world not to feature a 24-karat, .9999 fine gold coin. The Gold American Eagle is struck in 22-karat gold, while the Gold Canadian Maple Leaf and gold bullion coins from the Perth Mint feature .9999 fine gold.

Gold American Buffalo coins are available only in one troy ounce, and like other bullion coin programs from the US Mint, feature an iconic image from American history on both the obverse and reverse. James Earle Fraser’s 1913 design for the nation’s five-cent circulation piece was refined and used on the Gold American Buffalo.

The 2017 1 oz Gold American Buffalo coin in this listing has a Mint State 70 grade from the PCGS. Each of these coins has its full, original luster from the mint, and lacks any sign of detracting flaws on the surface areas.

A First Strike coin is one that the PCGS has verified was received by its depository, or an authorized third-party depository, within the first 30-day window of the release date for 2016 coins set by the United States Mint.

On the obverse side of each coin is Fraser’s depiction of a Native American chieftain. Featured in right-profile relief, the design is a combination of the facial features from numerous real-life tribal leaders. Engravings include the year of minting and the word “Liberty.”

The reverse features the image of a massive bison. This image was inspired by Black Diamond, a bison that called New York City’s Central Park Zoo home in the early 20th century. Engravings on this side include “United States of America,” “E Pluribus Unum,” “In God We Trust,” and the coin’s face value, weight, purity, and metal content. Premiums on American Buffalo Coins are typically low, but since this is a graded First Strike, there is more value over gold price per oz.

Please feel free to reach out to Silver.com with your questions. Our team members are available at 888-989-7223, online through our live chat, or via our email address.