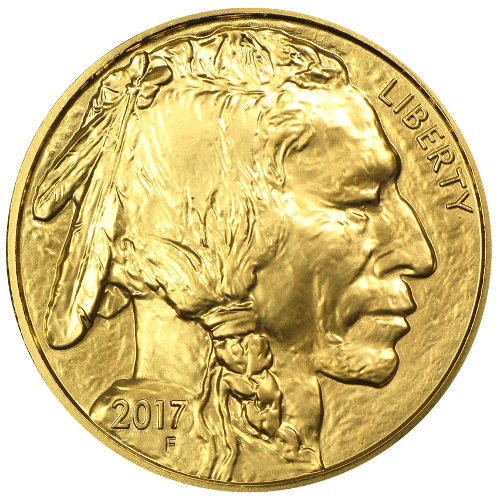 Each 2017 1 oz Gold American Buffalo Coin is available from Silver.com today in BU condition. Coins in BU condition exhibit no signs of wear and tear, though you may notice minor flaws ranging from breaks in the luster and spotted surfaces to contact marks from the coining process.

The Buffalo Nickel from James Earle Fraser was designed in 1913 based upon Fraser’s experiences growing up in the Upper Midwest. He chose the design of a Native American chieftain on the obverse, with a North American bison on the reverse.

On the obverse of the 2017 1 oz Gold American Buffalo coin you’ll find Fraser’s original image of a Native American chieftain. This right-profile portrait was created by Fraser in 1913 by combining the facial features of three real-world native leaders to create a singular image.

The reverse of the 2017 Gold American Buffalo coin features a North American bison. Fraser created this bison based upon the image of Black Diamond, a resident bison of the Central Park Zoo in New York City at the turn of the 20th century.

Please direct your questions to Silver.com customer service. Our associates are available on the phone at 888-989-7223, online through our live chat, and via our email address.