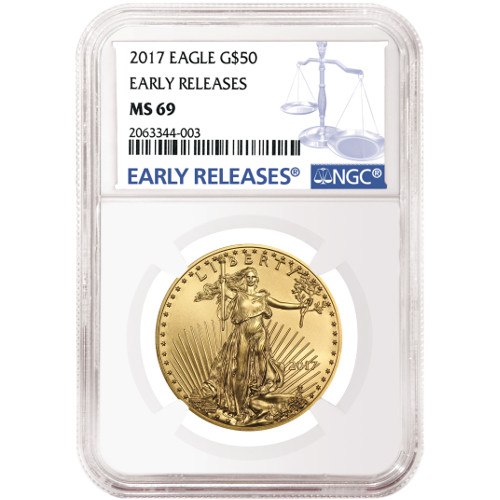 Each 2017 1 oz Gold American Eagle Coin in this listing from Silver.com earned a Mint State 69 grade from the NGC. Coins in this condition are near-perfect and exhibit full, original mint luster. However you’ll notice a maximum of two minor flaws such as miniscule hairlines or contact marks, which are found only outside the primary focal areas of the coin.

An Early Release coin is one that was received by the NGC or an approved third-party depository within a certain time frame. These coins must arrive for certification within the first 30 days of the release date the US Mint sets for 2017 Gold Eagles.

Saint-Gaudens’ Lady Liberty graces the obverse of all 2017 1 oz Gold American Eagle coins. Created in 1907, it originally featured on the $20 Gold Double Eagle from 1907 to 1933 and is considered the greatest American coin design of all time. Its introduction started a revolution in American coin design.

The reverse of the 2017 1 oz Gold American Eagle Coin was designed by Miley Busiek in 1986 and features a family of nesting bald eagles, with the male flying overhead as the female keeps a close watch on the hatchlings in the nest.

If you have any questions, please don’t hesitate to contact Silver.com. Our customer service team is available at 888-989-7223, online through our live web chat service, and via our email address.