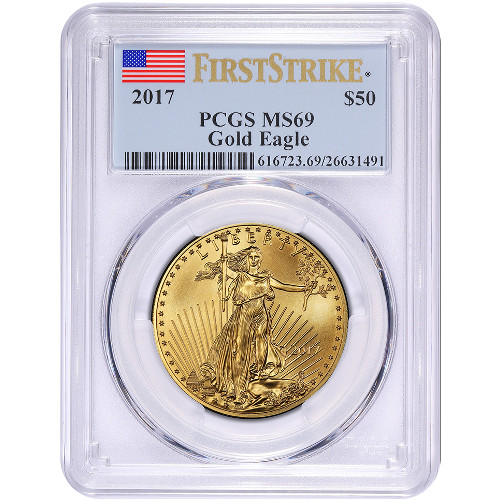 The nation’s official gold bullion coin celebrates a monumental milestone in 2016, and you have a chance to join in that celebration as the United States Mint releases the 2016 Gold American Eagle coin. Available since 1986 in bullion and proof, with four total weights, the Gold American Eagle is an annual best-seller that is sought after by investors and collectors alike. The 2017 1 oz Gold American Eagle is now available with certification online at Silver.com.

When the United States Mint introduced the Gold American Eagle, it dug back in the archives to resurrect the most popular coin design in American history. Augustus Saint-Gaudens’ Liberty image was the first design of Lady Liberty that featured an American look and feel, with a modern interpretation.

His design was completed in 1907 and used primarily on the $20 Gold Double Eagle coin from 1907 to 1933. Originally intended for use on a high-relief proof, Saint-Gaudens’ design and the abilities of the US Mint at that point in history did not match up. Today though, Saint-Gaudens’ design lives on as the face of the nation’s official gold bullion coin.

On the obverse of the 2017 1 oz Gold American Eagle coin is Augustus Saint-Gaudens’ original Liberty image. Designed in 1907, it was originally intended to be used on an ultra-high-relief striking, but the US Mint lacked that capability at the time. His creation appeared on the $20 Gold Double Eagle from 1907 to 1933 and was revived and refined for the Gold American Eagle.

All 2017 1 oz Gold American Eagle Coins listed in this Silver.com listing are MS69 specimens according to the PCGS. Coins in this condition have full, original mint luster but also a maximum of two minor detracting flaws. First Strike is a designation for coins that arrive at the PCGS or an approved third-party depository within the first 30 days of the date of issue for 2017 Gold Eagles as set by the US Mint.

We encourage all Silver.com shoppers to contact us with questions. Our associates are available at 888-989-7223, online using our live chat, and via email.