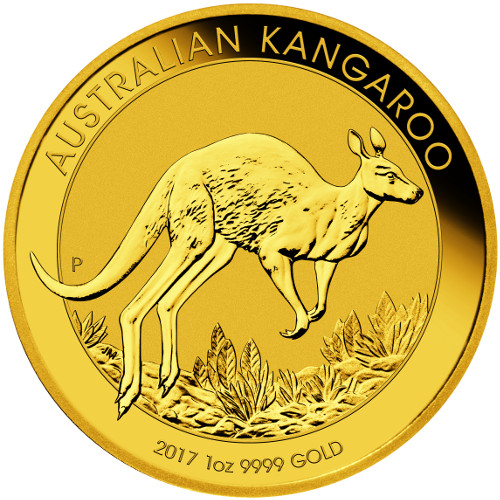 Each year the Perth Mint produces a vast array of silver and gold coins in bullion and proof versions. Among the most coveted is the Gold Australian Kangaroo. Originally known as the Gold Nugget, these coins have new designs on the reverse every year and are excellent for investors or collectors. Today, the 2017 1 oz Gold Australian Kangaroo Coin is available from Silver.com.

Each 2017 1 oz Gold Australian Kangaroo Coin for sale on Silver.com in this listing is in BU condition. Coins in this condition show no signs of wear and tear, though you are likely to notice minor flaws such as breaks in the luster, spotted surfaces, or contact marks from the coining process.

Gold Australian Kangaroo coins have been available since 1986 with a new design on the reverse side each year. The coins were first introduced in 1986 as the Gold Nugget, and featured a new gold nugget depiction on the reverse through 1989.

Beginning in 1990, the same year the Australian Kookaburra debuted, the Perth Mint rebranded these coins the Gold Australian Kangaroo coin. It continued the use of the same motif each year, but featured the kangaroo now with a new design on an annual basis.

The reverse of the 2017 1 oz Gold Australian Kangaroo bears the image of a lone kangaroo as it hops across the Outback. Kangaroos, at last report, are said to number around 30 million in the wild.

On the obverse you’ll find the right-profile portrait of Queen Elizabeth II. Her Majesty’s effigy was created in 1998 by Ian Rank-Broadley, and this particular design is a fourth-generation depiction of the Queen.

Perth Mint was founded in 1899 as the third and final Royal Mint facility in Australia. Following the closure of the Sydney Mint and Melbourne Mint, it remains as the oldest facility in the country, and is a separate entity from the Royal Australian Mint.

Please contact Silver.com associates with your questions. We’re available at 888-989-7223, online using our live web chat, and via our email address.