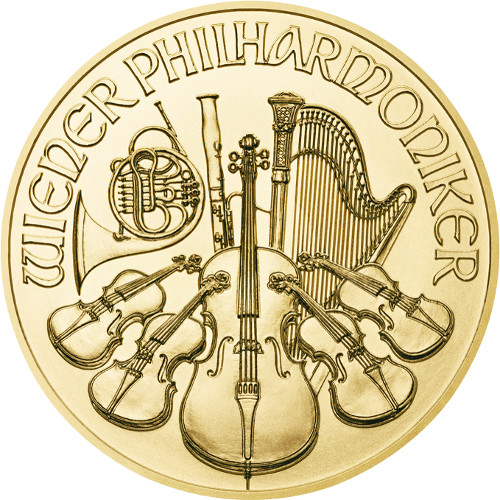 Each 2017 1 oz Gold Austrian Philharmonic Coin listed here today is in BU condition. Coins in this condition exhibit no signs of wear and tear, though you may notice minor flaws ranging from breaks in the luster and spotted surfaces to contact marks from the coining process.

Gold Austrian Philharmonic coins were originally introduced in 1989 with a design from Thomas Pessendorfer. A lot has changed in this coin program since its introduction. First off, the program has expanded from the original offering of only the 1 oz weight, to now include a ½ oz, ¼ oz, 1/10 oz, and 1/25 oz coin. The latter coin is the latest addition, added to the program in 2014 for the 25th anniversary.

On the obverse of the Gold Austrian Philharmonic coin is the image of the Great Pipe Organ from the Musikverein Concert Hall. The home of the Vienna Philharmonic Orchestra, this image is surrounded by engravings of the nation of issue, weight, metal content, purity, year of issue, and face value of the coin. All engravings are in German.

The reverse of the 2017 1 oz Gold Austrian Philharmonic Coin includes a collection of musical instruments, featuring the cello, four violins, bassoon, harp, and Vienna horn. Engravings on this face include only the name of the orchestra, which is again featured in German like those engravings on the obverse.

If you have any questions, please don’t hesitate to ask. Silver.com customer service associate are available at 888-989-7223, on the web using our live chat, or via our email address.