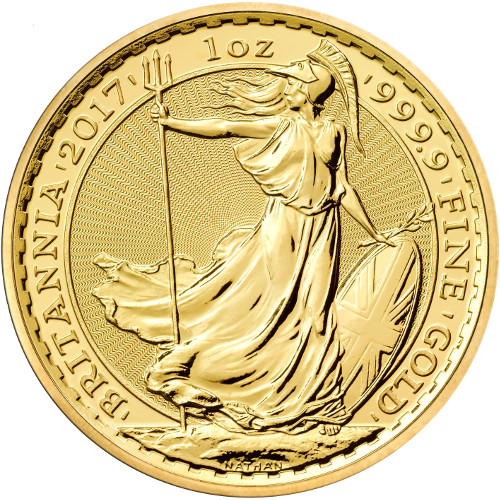 The British Gold Britannia Coin is the official bullion coin of the United Kingdom, and features an iconic design that has been used on British coinage since the 1700s. The symbolism of Britannia has stuck with the British people for more than two thousand years. In 1987, the Royal Mint brought back the design on a new bullion product that remains in production today as the Britannia coin. Today, the 2017 1 oz Gold British Britannia Coin is available online at Silver.com.

Britannia is an ancient term used for multiple purposes in the course of European history. When the Roman Empire moved to conquer the British Isles, the soldiers originally referred to the province as Britannia. Over time, the term came to be used in reference to the native inhabitants of the Isles as well.

All 2017 1 oz Gold British Britannia Coins in this listing are in BU condition. Coins in this condition show no signs of wear and tear, though you may notice minor flaws ranging from breaks in the luster and spotted surfaces to contact marks from striking the coins during the production process.

On the reverse of the 2017 1 oz Gold British Britannia Coin you’ll find the image of Britannia, which has featured on the coins unchanged for the last 30 years. Britannia originally featured on sovereign coins in the early 18th century at the formation of the United Kingdom between England and Scotland.

The obverse of all Gold British Britannia Coins includes the new fifth-generation depiction of Queen Elizabeth II. Her Majesty’s effigy was last updated in 1998 by Ian Rank-Broadley, but in 2015 the Royal Mint unveiled a new image of the Queen from 33-year-old Jody Clark, the youngest engraver and artist ever to complete her portrait.

Please don’t hesitate to contact Silver.com with any questions. You can reach out to our customer service team on the phone at 888-989-7223, connect with us online through our live chat, or email us directly.