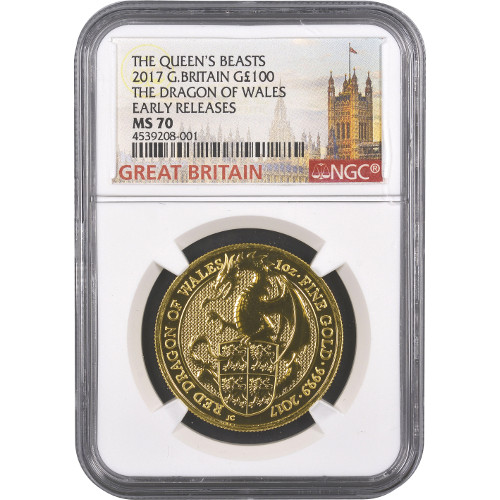 The coins in the Queen’s Beast collection from the Royal Mint offer an excellent option to those looking to buy gold or silver. Each new release in the 10-coin series includes a different design, enhancing the value of these coins for collectors as well as investors. Right now, the 2017 1 oz Gold British Queen’s Beast Dragon Coin is available to purchase online at Silver.com in perfect condition!

Each 2017 1 oz Gold British Queen’s Beast Dragon Coin listed here is in perfect condition. Mint State 70 coins have full, original mint luster and lack all detracting flaws on the surface areas. The Early Release designation indicates the coins arrived at the NGC for certification within 30 days of their initial release from the Royal Mint.

If you have any questions, please don’t hesitate to ask. Silver.com associates are available on the phone at 888-989-7223, on the web using our live chat, and via our email address.