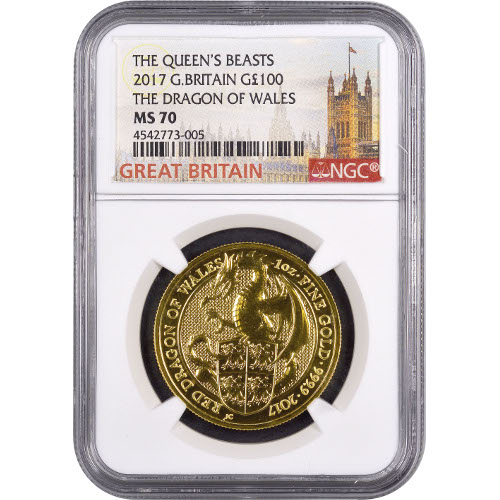 When it comes to purchase silver and gold coins, there is added value that comes from certification. Whether it’s for investment or a personal collection, gold bullion that has been certified for quality by the Numismatic Guaranty Corporation is a solid purchase. Today, the 2017 1 oz Gold British Queen’s Beast Dragon Coin is available to you online at Silver.com in perfect condition.

Each of the 2017 1 oz Gold British Queen’s Beast Dragon Coins listed here are in perfect condition in the eyes of the NGC. Mint State 70 coins have full, original mint luster and lack all detracting flaws on the surface areas.

Please don’t hesitate to reach out to Silver.com with questions. You can reach our team members on the phone at 888-989-7223, on the web using our live chat, and using our email address. You can also visit our website at any time to find the current price of gold.