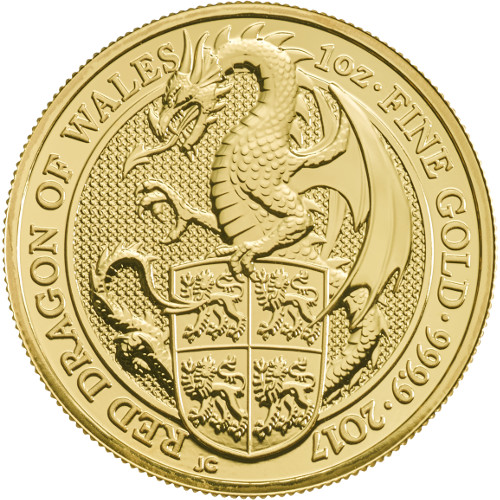 The latest coin series from the Royal Mint in England is the new Queen’s Beasts coin series. Featuring both gold and silver versions with each new release, there will be a total of 10 coin designs in this upcoming series. The latest of these is the Red Dragon of Wales, which is now available to you on Silver.com with release of the 2017 1 oz Gold British Queen’s Beast Dragon Coin.

The Red Dragon of Wales is depicted on the modern flag of Wales, a nation that is part of the United Kingdom of Britain, Scotland, and Northern Ireland. The Red Dragon goes back much further than the kingdom itself though. The dragon itself was originally used by Owen Tudor, grandfather of Henry VII, as a badge symbol, and the Red Dragon of Wales includes the coat of arms used by the last native Prince of Wales, Llywelyn ap Gruffudd.

All 2017 1 oz Gold British Queen’s Beast Dragon Coins in this listing are in BU condition. Coins in BU condition have no signs of wear and tear, though you may notice a range of minor flaws including breaks in the luster, spotted surfaces, and contact marks from the process of striking the blanks at the mint.

Silver.com encourages customers to contact us with questions at 888-989-7223, chat with us live online, or send us an email. You can also visit our website for all the information you need when buying gold.