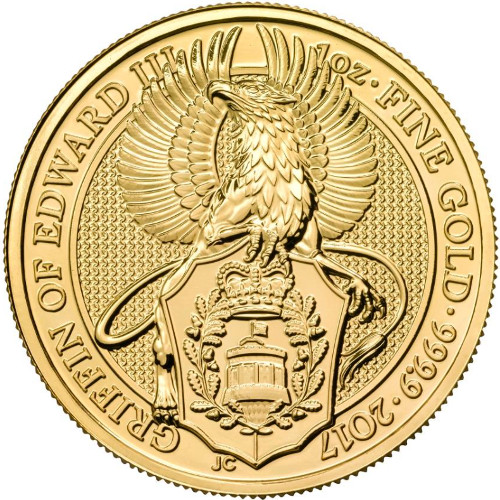 The Queen’s Beast Series of silver and gold coins from the Royal Mint is an exceptionally exciting collection. The newest offering from the mint includes 10 different releases planned through 2021, and includes images of animals from British heraldry. Available in two weights in gold and a first-ever 2 oz silver coin, these products are a must-have in your collection! Today, the 2017 1 oz Gold British Queen’s Beast Griffin Coin is available online at Silver.com.

When Queen Elizabeth II was crowned Queen of England in 1952, her official coronation ceremony actually didn’t occur until early 1953. When it did happen, there were 10 creatures sculpted to represent the history of the British monarch which stood around her in Westminster Abbey.

Each of the creations stood six feet tall and represented the various strands of Britain’s royal ancestry that were about to be brought under one banner by the young Elizabeth. All of the statues were sculpted by famed artist James Woodford RA, and today the originals can be found on display at the Canadian Museum of History in Quebec, Canada.

All 2017 1 oz Gold British Queen’s Beast Griffin Coins in this listing are in BU condition. Coins in this condition show no signs of wear and tear, though you may notice minor flaws ranging from breaks in the luster and spotted surfaces to contact marks from the striking of blanks in the mint, however the premium will vary based on demand from year-to-year that’s added on to gold price per oz.

The obverse of all Gold British Queen’s Beast Griffin Coins features the right-profile portrait of Queen Elizabeth II. Her Majesty’s effigy appears on the obverse of all British coinage, and this latest fifth-generation depiction comes from Jody Clark and was released for British currency starting in late 2015.

On the reverse of all 2017 1 oz Gold British Queen’s Beast Griffin Coins is the image of the griffin created by Clark. It depicts the Griffin standing with its front legs and talons grasping the seal of Edward III. The griffin was very closely associated with Edward III, who ruled for more than 50 years and used the griffin on his private seal.

Please don’t hesitate to reach out to Silver.com with any questions. You can contact our customer service team at 888-989-7223, or connect with us online through our live web chat and email features.