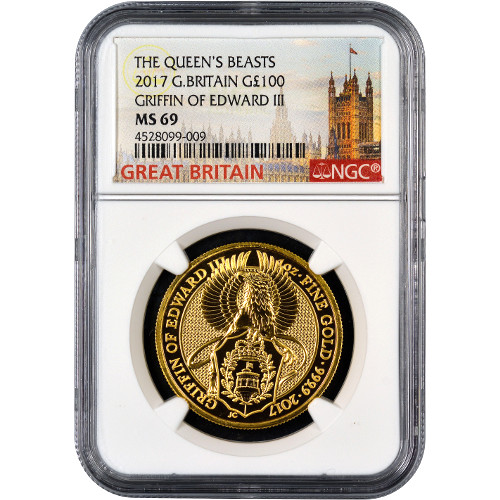 The Royal Mint’s Queen’s Beast collection of silver and gold coins is an exceptional offering for both investors and collectors. Those who buy gold for the inherent value will find a great deal in the .9999 fine gold content of these coins, while collectors will enjoy the changing designs in this 10-coin collection. Today, the 2017 1 oz Gold British Queen’s Beast Griffin Coin is available to purchase online at Silver.com in near-perfect condition!

The British Queen’s Beast Collection is an exciting 10-coin series that chronicles the animals of heraldry in the British monarch. This particular collection focuses on 10 statues that were carved and present during Queen Elizabeth II’s coronation to the British throne back in 1953. Following the release of the Lion of England, the Griffin takes center stage in the second release.

Each of the 2017 1 oz Gold British Queen’s Beast Griffin Coins in this listing have earned Mint State 69 certification from the NGC. Coins in this condition show full, original mint luster, but also possess minor flaws. There are a maximum of two minor detracting flaws on these coins, which are limited to minuscule contact marks or hairlines outside the primary focal areas of the design field.

On the obverse of the 2017 ¼ oz Gold British Queen’s Beast Griffin Coin is the right-profile portrait of Queen Elizabeth II. Designed in 2015 by Jody Clark, this is the fifth-generation depiction of the Queen used since 1952.

The reverse of all 2017 ¼ oz Gold British Queen’s Beast Griffin Coins includes the design of a griffin standing with its front talons perched atop the seal of Edward III and its wings spread wide above its head. This side includes the engravings of “Griffin of Edward III” and “1 oz Fine Gold 9999 2017.” Jody Clark’s initials of “JC” are also engraved on this face.

Please direct your questions to a Silver.com associate at 888-989-7223. You can also reach us online through our live chat and email address.