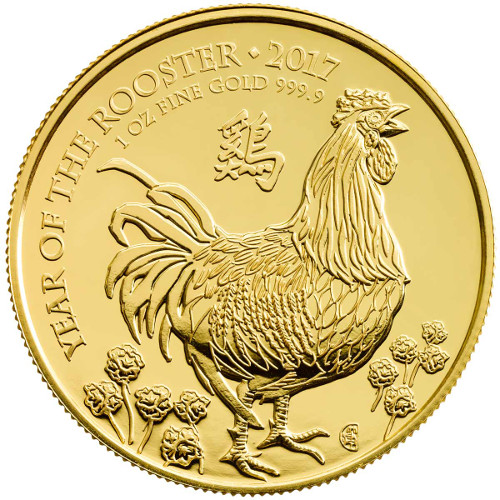 The Shengxiao Series from the Royal Mint marks the first series of United Kingdom lunar coins. The designs are a mixture of contemporary British art and the fascinating animals of the Zodiac. Created by Wuon-Gean Ho, the images of the Shengxiao Series reflect the artists British-Chinese heritage. The 2017 1 oz Gold British Rooster Coin is available today on Silver.com.

All 2017 1 oz Gold British Rooster Coins available for purchase today are BU coins. A Brilliant Uncirculated specimen shows no signs of wear and tear on its surfaces, however minor flaws do exist. These minor issues range from breaks in the luster and spotted surfaces to contact marks from striking the coins.

The Shengxiao Series from the Royal Mint debuted in 2014, with all designs to date created by Wuon-Gean Ho. The mintage figures for the Royal Mint program are rather unique in that they always have the number eight somewhere in the amount. Though specific figures for gold and silver options vary, the Royal Mint includes an eight in each mintage because it is a lucky number in Chinese culture.

On the obverse of each 2017 1 oz Gold British Rooster Coin is the image of Queen Elizabeth II, created in 2015 by Jody Clark. This right-profile portrait is the latest image of Her Majesty to grace British coinage, and reflects a fifth-generate depiction of the Queen in her more-than-60-year reign.

The reverse of the 2017 Gold British Rooster includes the all-new Year of the Rooster design from Ho and the Royal Mint. This year’s design features a rooster in the center of the field, along with engravings that identify the year of issue, name of the issue, and the Chinese symbol for rooster.

Gold British Rooster coins are sought after in anticipation for gold’s continued historic value, which you can monitor minute by minute via our active charts that show spot gold price.

The Royal Mint was founded in 886 as the London Mint, and was the first occurrence of a singular minting institution in Britain. Over the course of the next 500 years, the mint would become the sovereign facility of the kingdom and today is one of the most respected in the world.

We encourage all Silver.com customers to contact us with questions. Our customer service team is available at 888-989-7223, online using our live web chat, and via email.