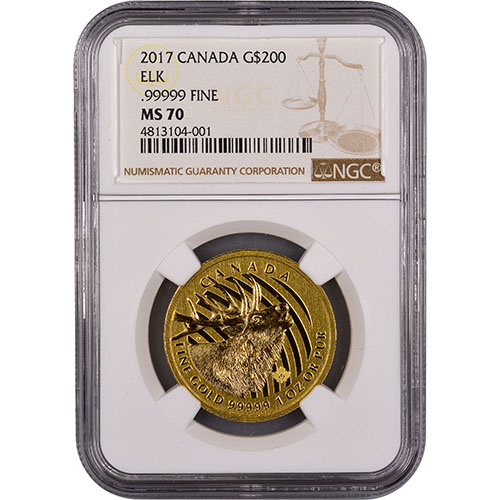 The Royal Canadian Mint released the first coin in the Call of the Wild Series in 2014 to a great reception from investors. The coins in this collection all feature .99999 fine gold content, a rarity even from the likes of the Royal Canadian Mint. Additionally, there are new annual designs which give the coins a collectible twist as well. Right now, 2017 1 oz Gold Canadian Elk Coins are available to purchase online at Silver.com in perfect condition!

Each 2017 1 oz Gold Canadian Elk Coin available today from Silver.com comes with a Mint State 70 certification from the NGC. Coins in this condition exhibit full, original mint luster and lack any signs of detracting flaws on the surface area.

The Royal Canadian Mint has issued .99999 fine gold coins in the past, but typically as one-time releases of the Gold Canadian Maple Leaf. The Call of the Wild Series is the first collection to use .99999 fine gold from the mint, and there is a different animal species common in Canada featured on the coin’s reverse.

Call of the Wild launched in 2014 with the Howling Wolf, a coin depicting the elusive gray wolf. This was followed by the Growling Cougar in 2015, the Roaring Grizzly Bear in 2016, and then these 2017 1 oz Gold Canadian Elk Coins. A subsequent 2018 Golden Eagle release has also been issued by RCM.

On the reverse of the 2017 1 oz Gold Canadian Elk Coins, you’ll find the image of a male elk bugling out his natural call. Male elks are distinguished from females in the species by their large antlers which are often used in wrestling or sparring with other males for the favor of a female mating partner.

The obverse of the Gold Canadian Elk Coins bears the image of Queen Elizabeth II. Her Majesty has reigned as Queen of England since 1952, making her the nation’s longest-reigning monarch. She surpassed her own great-great-grandmother Queen Victoria I’s 63-year rule in 2015.

If you have any questions, please feel free to contact Silver.com. Our customer service team is available to you at 888-989-7223, online using our live chat, and via our email address. For up-to-date spot gold prices, don’t forget to visit our website.