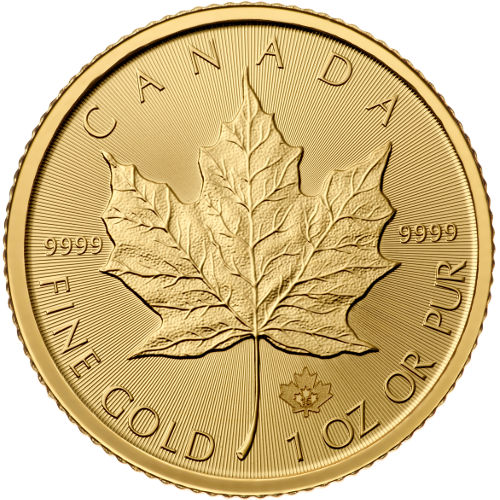 Gold Canadian Maple Leaf coins debuted with the 1 oz coin, containing .999 pure gold, in 1979. Only the South African Gold Krugerrand existed at this time for private investors to purchase, but the Gold Maple Leaf changed all of that. Western nations were boycotting South Africa at the time over its apartheid system that separated and demeaned black residents of the country.

The Royal Canadian Mint introduced new security features for the Gold Canadian Maple Leaf series that began appearing on the coins in 2015. First, a set of intricately machined radial lines covers the background of the coin to provide a layer of protection against counterfeiting. Additionally, a small maple leaf has been added below the primary design set. When viewed under magnification, the year of minting should appear within that maple leaf as “17.”

On the reverse of all 2017 1 oz Gold Canadian Maple Leaf Coins you’ll find the sugar maple leaf design in the middle, with radial lines around the entire reverse surface and the maple leaf privy to the lower-right side of the design field.

The obverse of the Gold Canadian Maple Leaf coin features an effigy of Queen Elizabeth II. Created in 2003 by Susanna Blunt, this right-profile portrait of the Queen debuted on the maple leaf series in 2005. It includes engravings of her name, the year of issue, and the coin’s face value.

All 2017 1 oz Gold Canadian Maple Leaf Coins in this Silver.com listing are in BU condition. Coins in this condition have no signs of wear and tear, though you may notice minor flaws such as the presence of breaks in the luster, spotted surfaces, or contact marks as a result of the production process at the mint.

Gold Canadian Maple Leaf coins are sought after in anticipation for gold’s continued historic value, which you can monitor minute by minute via our active charts that show the gold price today and the recent past.

We encourage all Silver.com shoppers to reach out to our customer service team with questions. Our associates are available at 888-989-7223, online through our live web chat, and via our email address.