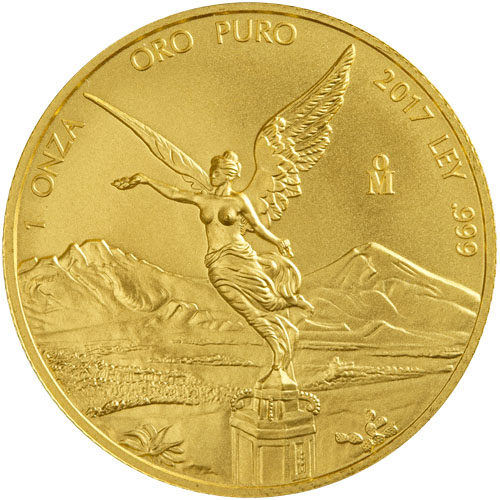 When the Mexican Mint decided to commemorate the nation’s 100th anniversary of independence from Spain, it introduced a gold Centenario coin featuring images reminiscent of the battle for freedom from Spanish oppression. The Centenario is no more, but the Gold Mexican Libertad has filled the void with the same design features and status as the gold bullion coin of Mexico. The 2017 1 oz Gold Mexican Libertad Coin is yours today courtesy of Silver.com.

If you’re looking to buy gold, the 1 oz Gold Libertad coin from the Mexican Mint is the ideal option. A government-backed sovereign bullion coin, each Gold Libertad consists of .999 fine gold with a brilliant design and limited mintage figures each year.

The 1 oz Gold Mexican Libertad Coin debuted from the Mexican Mint in 1981 alongside the 1/4 oz and 1/2 oz gold coins. After just one year of availability, the coins were discontinued until 1991. From there, Gold Libertads were available from 1991 to 1994, in 2000, and since 2002 without disruption.

On the obverse of all 2017 1 oz Gold Mexican Libertad Coins you’ll find the depiction of Winged Liberty. A symbol of independence for the Mexicans during the revolution against Spain, she is based upon the Goddess of Victory from Greek mythology, but hold broken chains in her left hand in Mexican depictions.

We encourage all Silver.com customers to call us at 888-989-7223 with questions. You can also reach us on the web using our live chat and email services.