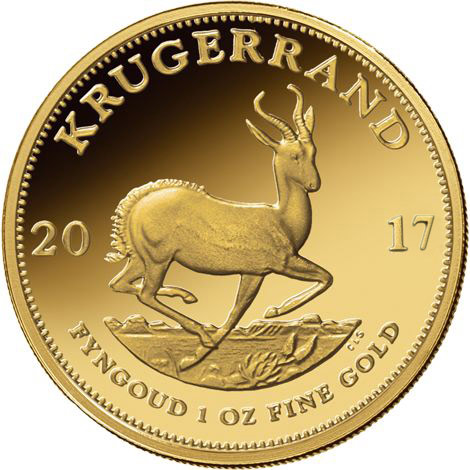 South Africa has long been a hotbed of precious metal and gemstone mining. The country is home to some of the largest gold reserves found in the world, and it is no surprise that the nation was the first to issue a commemorative gold bullion coin as a national marketing tool. The 2017 1 oz Gold South African Krugerrand Coin is available to purchase today online at Silver.com.

The Gold South African Krugerrand was unique when it was released for a number of reasons. Despite the massive variety of gold bullion coins available today, in 1967 there were none available to global investors. Even more unique was the issuance of Krugerrands, originally, as legal tender coins.

For more than a decade, the Gold South African Krugerrand was the only gold bullion coin available to global investors. Although the Krugerrand became a target of Western economic boycotts on South Africa, its massive success was also the inspiration behind the latter creation of the Gold Canadian Maple Leaf (1979), Gold Chinese Panda (1982), Gold American Eagle (1986), and the Gold British Britannia (1987).

The obverse of the 2017 1 oz Gold South African Krugerrand Coin features the left-profile portrait of Paul Kruger. He was the 5th President of South Africa and a major political and military figure in early 20th century South Africa during the Boer Wars.

On the reverse of all Gold South African Krugerrand coins is the image of a Springbok antelope. Both sides of the coin have engravings in both English and the native Afrikaans spoken by tribes and ethnic groups in South Africa. The designs on the modern obverse and reverse were refined in 1984, with Otto Schultz revitalizing Kruger’s portrait and Coert Steynberg reimagining the Springbok antelope.

Each 2017 1 oz Gold South African Krugerrand in this product listing is in BU condition. Coins in this condition have no signs of wear and tear on the surfaces, but may feature minor flaws ranging from breaks in the luster and spotted surfaces to contact marks from the production process at the mint.

We encourage all Silver.com customers to reach out to our customer service team. Our associates are available on the phone at 888-989-7223, using our live web chat, or by sending us an email.